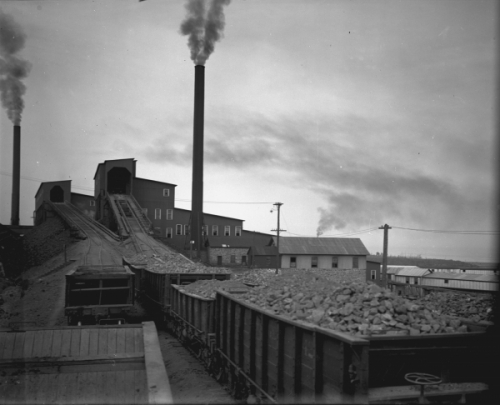 The multi-agency Buffalo Reef Task Force is moving forward on several fronts in its efforts to protect the underwater natural reef off the Keweenaw Peninsula from being smothered by migrating copper mine tailings.

The problem was created roughly a century ago, when dark-colored mine tailings, called stamp sands, were deposited into Lake Superior and along the shoreline at the community of Gay.

Gay was the former site of milling operations for the Mohawk and Wolverine mines.

In subsequent years, a large proportion of the stamp sands have moved southeast along 5 miles of shoreline with the aid of winds, waves and violent storms off Lake Superior.

Over the past few years, the stamp sands have reached the Grand Traverse Harbor, overrunning a protective barrier there, clogging the harbor and limiting recreational boating and negatively affecting commercial fishing operations.

According to Charles Kerfoot, a biological sciences professor at Michigan Technological University in Houghton, an estimated 4.6 million cubic yards of stamp sand has been deposited on the beach south of the original pile. Another 6.6 million cubic yards have moved into Grand Traverse Bay.

If the stamp sands move past the breakwater at Grand Traverse Harbor, they will also damage a 110-acre whitefish recruitment area south of the harbor.

An ancient riverbed area, called the “trough,” is situated just north of the reef, and is a natural sediment trap. Kerfoot estimated 2.9 million cubic yards of stamp sands have drifted into the trough.

“It is currently estimated that this reef, critical to both lake trout and lake whitefish populations in the area, is currently 35 percent unusable by spawning fish due to sand that has filled spaces between rocks, which are necessary for successful fish egg deposit and incubation,” said Phil Schneeberger, Michigan Department of Natural Resources Lake Superior Basin coordinator. “Furthermore, migrating sands along the shore have made nursery areas unsuitable to newly hatched fish.” 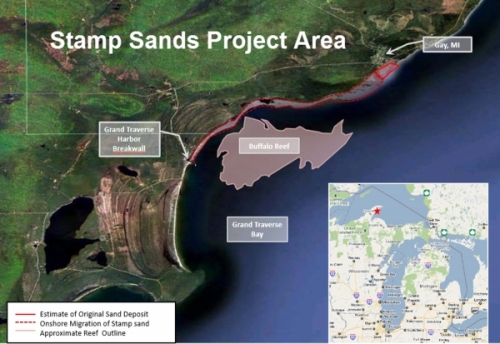 Both lake trout and whitefish spawn on the reef. After hatching, young larval trout move to deeper water for continued growth and development, while the young whitefish move close to shore, especially south of the harbor.

The Great Lakes Indian Fish and Wildlife Commission estimates the annual economic benefit of the reef at $1.7 million.

“The Keweenaw Bay Indian Community, as well as other tribes located around Lake Superior, are and have always been fishing tribes,” said KBIC President Chris Swartz. “Since time immemorial, these tribes have used the resources provided by gitchi-gami (or Lake Superior) to sustain their communities. This sustenance is not only physical; it is also spiritual, cultural, medicinal and economic.”

Swartz said modeling predicts that by 2025, 60 percent of the reef no longer will be viable for lake trout and whitefish spawning.

In testimony before Congress, Swartz said burying of the reef fish habitat in stamp sands would likely result in the loss of about 125,000 pounds of whitefish and 12,500 pounds of lake trout annually.

“If the reef is lost, over $1 million in tribal fishing jobs would also be lost,” Swartz said. “There would be additional impacts to the recreational fishery, as well as to local businesses that rely on locally caught fish.”

In 2018, the task force drafted plans to dredge stamp sands from the lake and the harbor to buy a few years of time, while a long-term solution is developed for the migrating stamp sands problem, potentially including finding a beneficial use for the sands.

Projects being considered for funding under the appropriation and estimated cost breakdowns (which are likely to change) include:

Federal aid to the effort

The U.S. Environmental Protection Agency has provided all federal funding on this project under the Great Lakes Restoration Initiative. 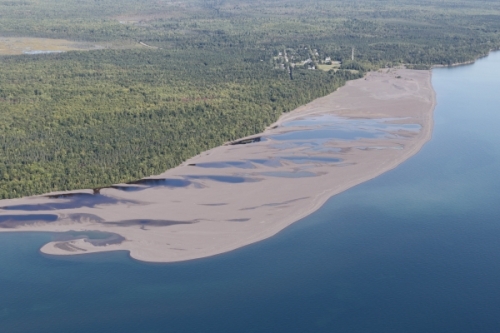 Recently, the EPA provided the Army Corps with an additional $946,000 in Great Lakes Restoration Initiative funding to award three options on a contract with Petersen Companies, Inc., of Minocqua, Wisconsin.

“This is great news and is another example of the continuing progress being made under the Great Lakes Restoration Initiative, and the EPA’s commitment to protect valuable resources in the Great Lakes for future generations,” said Steve Check, project manager, U.S. Army Corps of Engineers, Detroit District.

The award of these options will permit Petersen Companies, Inc. to dredge an additional 50,000 cubic yards of stamp sands from the trough.

“This brings the total estimated cubic yards scheduled for dredging to 157,500,” Check said. “This total is comprised of 27,500 cubic yards from in and around the Grand Traverse Harbor area, and an additional 130,000 cubic yards of stamp sands from the trough.”

Dredging is scheduled to begin this spring, with completion set for summer.

The total cost of the contract, including all options, is $3.7 million.

The cooperative project is being executed in partnership with entities represented by the Buffalo Reef Task Force, including the Army Corps, EPA, KBIC, Michigan Tech, the DNR and Michigan Department of Environmental Quality.

The Buffalo Reef Task Force was created by the EPA, which tasked the panel with developing a management plan for the stamp sands. A three-member steering committee was created to drive that initiative.

Steve Casey of the DEQ’s Water Resources Division in the Upper Peninsula had been the committee’s chairman. Casey retired Jan. 31. He has been replaced on the steering committee by Stephanie Swart, lake and Area of Concern coordinator for the DNR’s Office of the Great Lakes.

Prior to working with the Office of the Great Lakes, Swart was a National Pollutant Discharge Elimination System permit writer in the DEQ’s Water Resources Division. She has worked for the state of Michigan for 13 years. She previously worked as an aquatic biologist for the Michigan Natural Features Inventory.

Swart is a graduate of the 2009-2010 departments of Environmental Quality and Natural Resources Leadership Academy.

The third member of the steering committee is Tony Friona, Great Lakes liaison for the Army Corps’ Engineer Research and Development Center.

Meanwhile, the task force recently issued a Draft Preliminary Alternatives Analysis, which the public can offer comments on until March 8. 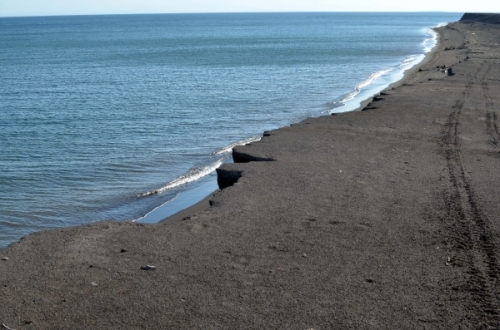 Comments will be incorporated into the draft, along with preliminary cost estimates for each alternative. A Draft Alternatives Analysis will then be released with this additional information incorporated in May. This report will be used to select the top two to four alternatives for further, detailed analysis.

The task force will hold a public meeting on the selection process in Lake Linden this summer. Detailed analysis of the top two to four alternatives will start in the fall of 2019.

Selection of the final plan for protecting Buffalo Reef is expected in 2020. Implementation is expected to begin in 2023, if funding for design and construction can be obtained.

On a parallel track, the Buffalo Reef Task Force continues to work with parties to develop beneficial uses for the stamp sands. Such uses could reduce the cost of implementing the management plan while improving protection of the reef.

Get more information on the ongoing effort to save Buffalo Reef at Michigan.gov/BuffaloReef. Visit a scientific webpage produced by Michigan Tech on the Buffalo Reef stamp sands issue.