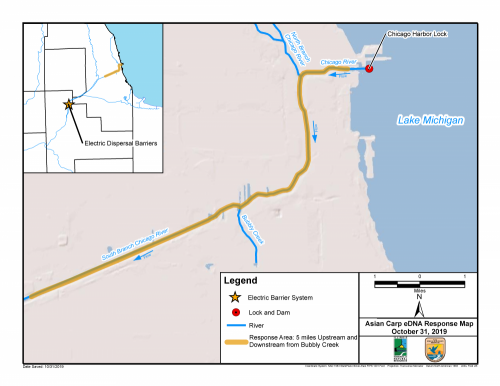 Michigan Department of Natural Resources Director Dan Eichinger recently confirmed the commitment of $8 million in state funds for the preconstruction, engineering and design phase of a multifaceted barrier system to prevent invasive Asian carp from entering the Great Lakes.

In a Nov. 4, 2019 letter to Lieutenant General Todd Semonite (download to read), chief of the U.S. Army Corps of Engineers, Eichinger explained that the funds were appropriated as non-federal match for design of a system of structural and non-structural control measures at the Brandon Road Lock and Dam in the Chicago Area Waterway System near Joliet, Illinois. Brandon Road 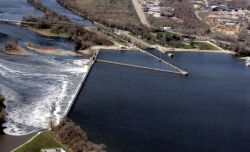 is a critical pinch point for keeping bighead, silver and black carp – the Asian carp species of greatest concern – out of the Great Lakes.

Taking action at Brandon Road took on added urgency with the Nov. 1 announcement that 76 of 414 water samples from waters connected to Lake Michigan – and well beyond Brandon Road Lock and Dam – tested positive for environmental DNA (eDNA) for invasive carp. Forty-nine of the water samples from the South Fork of the South Branch of the Chicago River, also known as Bubbly Creek, were positive for silver carp eDNA, while 27 were positive for bighead carp eDNA. 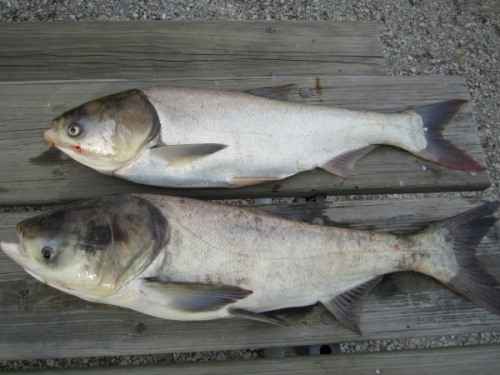 A comparison of silver (top) and bighead (bottom) carps.  Recent sampling at Bubbly Creek, a tributary of the Chicago River near Lake Michigan, identified eDNA from both silver and bighead carp. Photo courtesy of the Asian Carp Regional Coordinating Committee.

Although no live invasive carp were found in the recent sampling, the results showed far more invasive carp eDNA than had previously been discovered in these waters, prompting the Illinois Department of Natural Resources along with partner agencies to undertake additional surveillance for the presence of invasive carp. 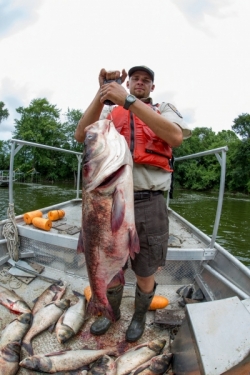 “Our economy and way of life in Michigan depends on the preservation of our water, but right now, the threat of invasive species like Asian Carp is putting the future of our Great Lakes, our economy, and Michiganders’ well-being at risk,” said Governor Whitmer. “The threat of Asian Carp is not new. It has grown to the point where we cannot afford to delay action. That’s why my administration has prioritized Great Lakes protection, and I’m hopeful that we can continue to work with our partners across the region to keep them safe from invasive species.”

The Brandon Road project, currently awaiting congressional approval, would install additional technologies -- including an electric barrier, underwater sound, an air bubble curtain and a flushing lock -- in a newly engineered channel designed to prevent invasive carp movement while allowing shipping into and out of the Great Lakes.

Supporting Illinois’ role as non-federal sponsor of the Brandon Road project, Eichinger’s letter expresses Michigan’s willingness to seek collaboration from other Great Lakes states and aid communications with these partners throughout the project.

“Stopping invasive carp from getting into the Great Lakes is one of the most important things we can do to protect Michigan’s signature natural resource,” said Eichinger. “The recent eDNA findings present one more piece of evidence that we need to move the Brandon Road project from concept to reality as soon as possible.”

Invasive bighead, silver and black carp can significantly alter the Great Lakes ecosystem, affecting the $7 billion fishery, $16 billion boating industry as well as other tourism-based industries, property owners, recreationists and others dependent on the Great Lakes and its tributaries.