River and lake users are reminded to clean, drain and dry boats and gear

The Department of Environment, Great Lakes, and Energy has confirmed the presence of European frogbit, a prohibited invasive aquatic plant, in Michigan's lower Grand River immediately upstream of Grand Haven in Ottawa County and in Pentwater Lake in Oceana County. 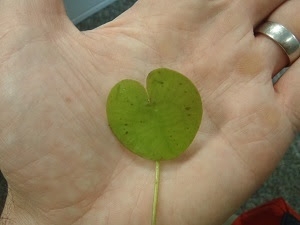 European frogbit was first detected in southeast Michigan in 1996 and has since spread along the coastal areas of lakes Erie and Huron up to the eastern Upper Peninsula.

In 2016, the plant, which resembles a miniature water lily with leaves about the size of a quarter, was discovered in Reeds and Fisk lakes in East Grand Rapids, the westernmost known point of detection in the U.S. until now.

Kevin Walters, a biologist with EGLE’s aquatic invasive species program, came across a floating mat of European frogbit while boating in the Grand River with his family in late July.

“While my professional work focuses on invasive species, this sighting while enjoying time on the water with my kids is a reminder about the important role boaters, anglers and waterfowl hunters play in preventing the spread of invasive species,” said Walters.

The discovery in Pentwater Lake, confirmed Aug. 21, was made by North Country Cooperative Invasive Species Management Area strike team member Mike Dussel, who was enjoying some free time kayaking on the lake.

What is being done?

Because the locations of both finds are within the West Michigan Cooperative Invasive Species Management Area’s region, EGLE is collaborating with the West Michigan CISMA and the Match-E-Be-Nash-She-Wish Band of Pottawatomi Indians (Gun Lake Tribe) on survey and response actions.

European frogbit thrives in slow-moving waters with little to no wave action. Both Pentwater Lake and the mouth of the Grand River, with its bayous, islands and wetlands, offer ideal habitat for the plant and are popular areas for boaters, anglers and waterfowl hunters.

An initial survey of the lower Grand River already is underway.

“We are using both small boats and kayaks in order to survey the river and its backwaters,” said Drew Rayner, West Michigan CISMA coordinator. “Our plan is to complete surveys on both water bodies this fall to determine the extent of the infestation. If weather permits, we will also begin surveying nearby waterways.”

Thus far on the Grand River, crews have found multiple patches of the invasive plant as far as 144th Avenue, approximately 5 miles upstream of the original detection. Overall survey results will help determine the scope of the response for both locations. 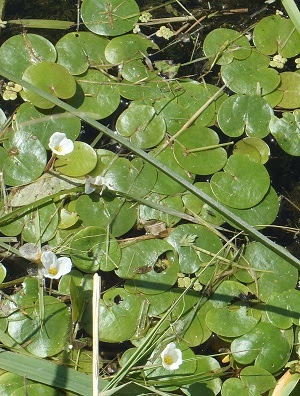 What is European frogbit?

A native of Europe and parts of Africa and Asia, European frogbit is an aquatic plant with small (half-inch to 2.5-inch), heart-shaped leaves. Unlike similar aquatic plants, European frogbit does not anchor its roots in the lake or stream bed but remains free-floating. Three-petaled white flowers with yellow centers appear briefly sometime between mid-July and mid-August.

Why is it a problem?

The plant quickly forms dense colonies or mats that prevent native plant growth, make movement difficult for ducks and large fish, and cause problems for boaters, anglers and swimmers.

European frogbit is spread by plant fragments or by turions – small, quarter-inch buds that break off the plant and spend the winter in lake or stream beds.

Plant parts easily can be transported to new water bodies on boat motors or trailers, fishing gear and other recreational equipment.

What can be done?

A new state law, effective in March of this year, requires boaters to do the following before transporting any watercraft over land:

Duck hunters who use these areas should check boats, blinds and even dogs for plants or turions that can spread European frogbit.

“Following these simple steps to clean, drain and dry boats and trailers, and any gear used in the water, can prevent the spread of invasive species like European frogbit to new locations,” said Walters.

What if I see European frogbit?

Anyone can help by reporting suspected European frogbit. The easiest way to report this harmful invasive plant is through the Midwest Invasive Species Information Network website, at MISIN.MSU.edu or by downloading the MISIN app to a smartphone.

If you encounter European frogbit on the water, take some photos. These can be uploaded on the MISIN website or attached to a report via the MISIN app. Reports are directed through MISIN to EGLE aquatic biologists.