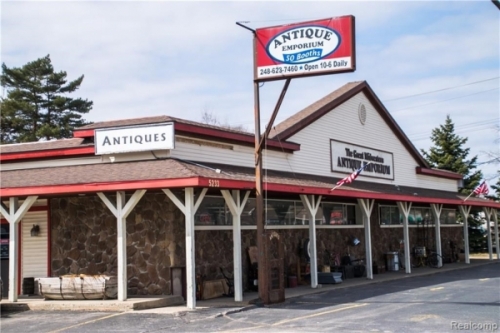 SkipperBud’s buys Antique Mall! What?? Why? To create a boat service center for Genesse and Oakland County boaters.

SkipperBud’s has acquired the former Great Midwestern Antique Emporium on three acres in Oakland County Michigan. The property located at 5233 Dixie Highway, Waterford Township, MI will serve as a boat service center and storage facility. SkipperBud’s made this purchase to better serve customers in the Oakland County Lakes region. The property was an antique mall under single ownership for nearly 40 years.

The SkipperBud’s team is excited to add this service facility to the Detroit metro area locations. There are already 5 other locations in Eastern Michigan:

“We tried buying this property last fall and missed out. The property went on the market again in April, due to covid-19 the winning bid from last fall fell apart. We quickly moved on contracting and closing on the property,” says Mark Ellerbrock, SkipperBud’s Vice President. SkipperBud’s closed on this property on May 20th, 2020.

The property has 185 feet of easy access frontage on Dixie Highway sittng on 3 acres. The buildings have nearly 7,000 square feet of indoor space that will be remodeled to accommodate boat service and rigging. The remaining property is gated and fenced and will be used as a boat storage facility according to Ellerbrock. The facility will be operational for this upcoming fall winterization and storage season.

The new property is located in Waterford Township. The Waterford community has been amazing. The Dixie Highway service center is strategically between SkipperBud’s full service Cass Lake Marina and full service Lake Fenton Marina. This service center will be a convenient addition for Oakland and Genesse county boaters.

A family owned marine business, specializing in boat sales, service, storage and marina operation since 1959. With locations throughout the Midwest, SkipperBud’s mission is to Deliver the Boating Dream. www.skipperbuds.com