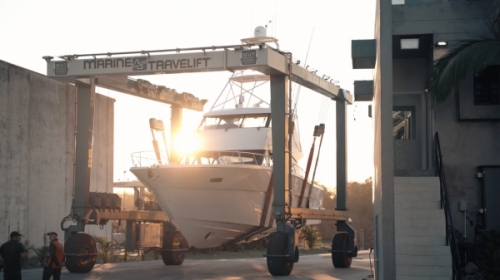 Dubbo based truck dealer Cliff Swane lives a long way from the ocean, but that has not diminished his love of blue water boating and especially game fishing and he plans to be doing a lot more of both from here on.

Cliff is set to take delivery of a highly customised Maritimo M59 motor yacht that has been designed specifically to his requests and is the perfect fishing and cruising platform.

"When you pull out the tape measure of life you realise that there is a lot more behind you than the inches left in front and that is one of the reasons I decided to build my ultimate dream boat," he said.

"Next year we will cruise around the top end and the Kimberley and the year after its off to the Pacific Islands for some spectacular gamefishing."

Cliff has had smaller boats most of his life and most recently had a 40 foot Caribbean which he keeps at Bermagui on the NSW south coast.

He said that when he started looking at what his next boat would be he stipulated that it must have shaft drives and he must also have the ability to highly customise the vessel if he was to do a deal.

Cliff's M59 is the latest vessel to come through the Maritimo One customisation division. "I am told that the total amount of modifications and additions we have made to the boat are some of the most Maritimo One division has worked with on a project " said Cliff. 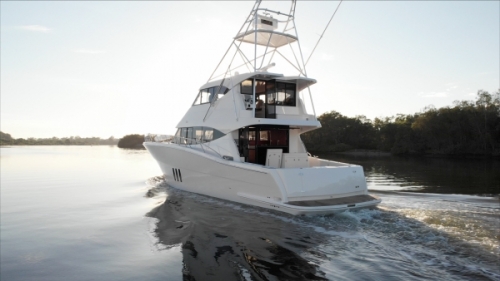 Amongst a long list of options and changes ranging from refrigeration to modifying the flybridge mouldings, so there was better vision of the cockpit for game fishing, Cliff also added significant fuel capacity.

"In the base M59 there is a 1000 litre fresh water tank forward of the master stateroom so we turned that into additional fuel capacity giving us a total of 5500 litres of fuel," he said.

"Maritimo then custom built water tanks in the rear lazarette."

Cliff's M59 has a specifically designed transom for backing up onto game fish. It has a game tower, rear helm station on the flybridge, multiple 22 inch Garmin screens at the flybridge helm and else where in the vessel, ice chipper and additional freezer capacity, a rod storage and tackle room, a modified full beam master suite layout, changes in the galley, including chilled freshwater and soda, additional fixed storage capacity in the pantry and numerous other additions and changes to the base model.

"When I started looking I looked at numerous different brands including those using Pod Drive propulsion systems," he said.

" I just wasn't comfortable with pods and I also wanted a boat with the ability to cruise as well as fish”.

"I wanted something that suited both serious fishing with my mates and family, but was also a luxurious and comfortable boat for extended cruising with family and friends.

"Maritimo delivered on all those fronts and they were also the only ones who were readily prepared and capable of handling all the changes and additions I wanted. 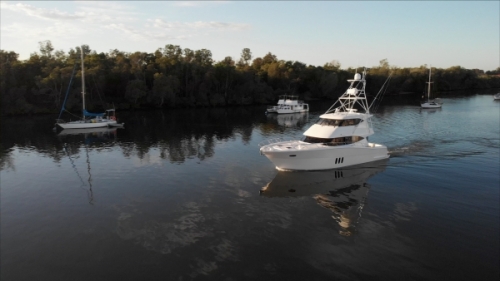 "Overall in terms of their willingness to understand what we wanted in a fish boat and then communicate that through the ranks to the factory floor the process was great and ultimately they delivered and that's no mean feat.

Cliff said his one regret in recent months has not being able to enter Queensland from NSW so he could be on hand as the M59 neared completion. The Covid-19 border lockdowns restricted that.

He said Maritimo was the only large scale motor yacht manufacturer in Australia that could handle such large scale customisation.

"Cliff, like all the owners who go through the Maritimo One experience, knew exactly what he wanted and he knew we could deliver where other manufacturers were not set up to do so," said Candler.

"From simple changes to things like the day bed in the master suite right through to more complex changes like the transom hull design and the creation of a tackle room as part of the third cabin we have been able to accommodate virtually all Cliff's requests."

Cliff's M59 is currently undergoing quality control and commissioning and will be handed over to him within the next few weeks.

Maritimo is Australia’s leading builder of long range luxury motor yachts for the world.
Formed within the Australian island continent and its vast coastline Maritimo has forged an international reputation. The company was founded by Australia’s most awarded boat builder, Bill Barry-Cotter, this year celebrating 60 years of boat building excellence. Maritimo is built upon the principles of engineering excellence, build integrity, and design innovation.Hand built by the finest craftsmen, Maritimo offers luxury motor yachts of three distinctive Series’. The M-Series Flybridge, the S-Series Sedan and the X-Series Sport.Experience gained from the World Champion Maritimo Racing division, infuses ocean proven endurance and unparalleled abilities in the water into every Maritimo.