The Eastland Disaster Historical Society (EDHS), now in its 21st year of honoring those affected by Chicago’s deadliest disaster, announces that it will transition from a family-run, not-for-profit organization to a key asset within several iconic Chicago area institutions including the Newberry Library, Chicago Genealogical Society, and the Chicago Maritime Museum.

Agreements with these institutions will ensure ongoing archival access to the comprehensive collection of EDHS family records, historical documents, and artifacts. Together, these materials tell a vivid story about the Eastland Disaster, the 844 people who tragically died in the event, and the impact it had on their families and the city of Chicago at large. 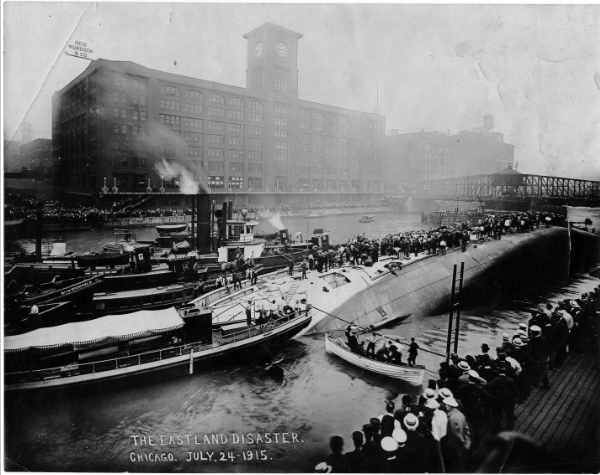 Passengers of the Eastland Disaster waiting to be rescued, July 24, 1915. The clock on the Reid Murdoch building seems to show the time of 8:45 a.m., approximately 75 minutes after the capsizing.

The invaluable collection of materials related to the Eastland Disaster is a one-of-a-kind collection, having been compiled over the course of more than two decades by EDHS research efforts. It includes information that historically has never been available to the public: family histories and photos provided by thousands of generous families across the country; plus unknown, forgotten, or inaccessible historical documents from various entities including the Cook County Coroner’s Office, the Red Cross, and the Western Electric Company. Six other museums throughout the Great Lakes region will also receive important pieces from the collection.

“We are thrilled about this fantastic collection of historical records coming to the Newberry,” declared Matthew Rutherford, Curator of Genealogy and Local History at the Newberry Library. “We are well-situated to provide access, assist researchers as they use the collection, and make it visible to audiences across Chicago and the rest of the country. The records in the Eastland Disaster collection are vital to family and local history, and to the national record as well.”

Ted Wachholz, EDHS Executive Director and Chief Historian, explained, “The Eastland Disaster was Chicago’s greatest loss-of-life tragedy, taking the lives of 844 people. The iconic institutions with whom we are working are committed to protecting and honoring the work that EDHS started 21 years ago, ensuring that the stories of Chicago’s greatest tragedy will always be preserved and shared for generations in the future.”
Agreements have been reached for the gifts of the EDHS collection. The accompanying transition of EDHS becoming a key asset within these organizations began late August. 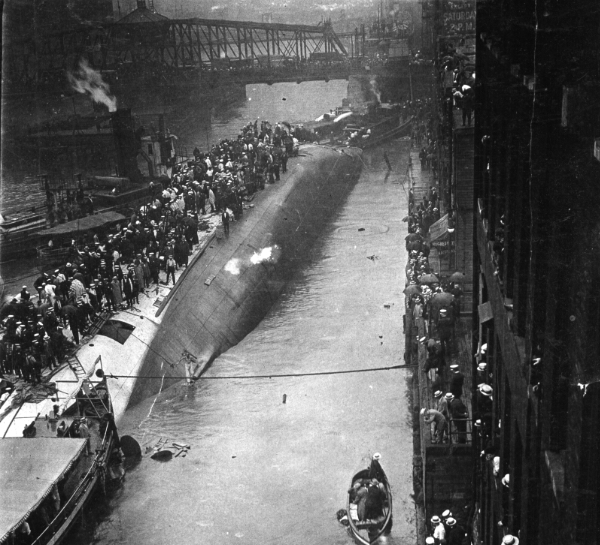 First responders at the scene, with passengers being rescued from on top of and within the hull of the Eastland, July 24, 1915.

The S.S. Eastland, known as the "Speed Queen of the Great Lakes," was part of a fleet of five excursion boats assigned to take Western Electric employees, families, and friends across Lake Michigan to Michigan City, Indiana, for a day of fun and fellowship. But the festivities were short-lived and quickly turned tragic.

On July 24, 1915, the Eastland, docked at the Clark Street Bridge, never left the Chicago River. Tragedy struck as the ship rolled into the river at the wharf's edge. More than 2,500 passengers and crew members were on board that day; 844 people lost their lives, including 22 entire families, far surpassing the lives lost in the Chicago fire of 1871. This year commemorates the 104th anniversary of the sinking of the S.S. Eastland. 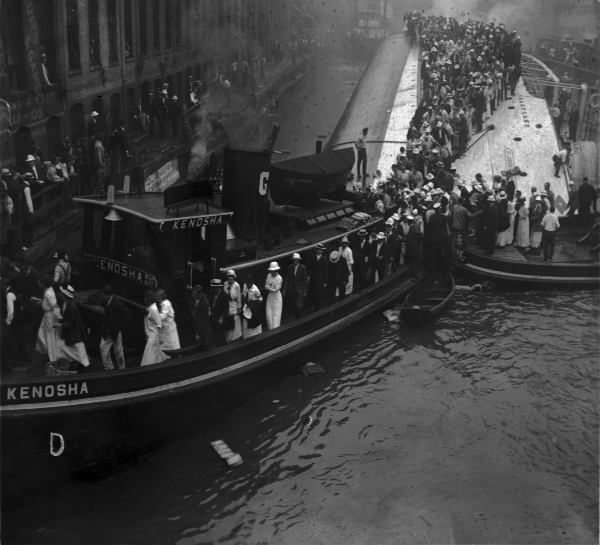 Moments after the Eastland rolled over, survivors walked across the S.S. Kenosha to safety, July 24, 1915.

The Eastland Disaster Historical Society (EDHS) is a charitable 501(c)(3) organization co-founded by Susan Decker and Barbara Decker Wachholz, the granddaughters (and only grandchildren) of brave Eastland Disaster survivor Borghild Amelia Aanstad. The Eastland Disaster Historical Society was founded to preserve and share the names, faces, and stories of thousands of ordinary people who were affected by the tragedy, connecting people today to the history of the tragedy and its victims, survivors, and heroes. More information can be found at EastlandDisaster.org.