Can Boats Be Recycled? 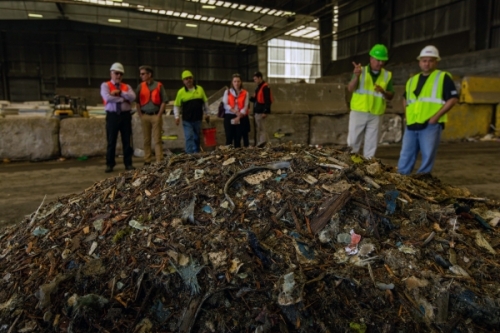 When Earth Day was created in 1970, mainstream America was largely tuned out to the benefits of recycling. Fast forward nearly half a century, however, and it’s fairly common to see local paper, glass, and plastic recycling programs. But what about boats? A pilot project by recreational marine industry businesses in the state of Rhode Island aims to finally find a solution for recycling boats.

The challenge today is that the most common way to dispose of an old boat is to crush and bury the pieces in a landfill where the fiberglass (essentially plastic) degrades slowly. Some boats are abandoned, left derelict by their owners or lost to storms, potentially creating navigation hazards or causing environmental harm to waterways.

Begun in 2018, the Rhode Island Fiberglass Vessel Recycling (RIFVR) Pilot Project aims to address the disposal issue for the high number of recreational fiberglass boats reaching the end of their service lives, largely as a result of the boat building boom of the 1970s, 80s and 90s. Between 2003 and 2012 alone, about 1.5 million recreational boats in the U.S. were “retired.”

The pilot project has now collected 20 tons of recycled material and is preparing to process the material to supply to concrete plants, where it will be used as an energy source and as a filler for concrete products according to Evan Ridley of the Rhode Island Marine Trades Association (RIMTA), the project’s sponsor. As part of the pilot is expected to be completed later this year, RIMTA will also conduct an economic analysis of the pilot program to help determine long-term feasibility, investigate legislation and regulations supportive of fiberglass boat recycling, document lessons learned, and develop resources to aid other fiberglass recycling programs.

“This is an issue that no one has solved yet, but one we think about every day,” said BoatUS Foundation for Boating Safety and Clean Water President Chris Edmonston. “No one wishes to see derelict boats on our waters. RIFVR could show the nation a more environmentally friendly solution to boat disposal, and we look forward to the findings and hopefully expanding the program.”

The Pilot Project was made possible with support from 11th Hour Racing, the Association of Marina Industries, BoatUS Foundation Grassroots Grant Program, and the Rhode Island Resource Recovery Corporation.