Sitting on the shore of Lake Erie, the energy in Cleveland continues to rise with new developments, distinct events, and exciting waterfront activities throughout the area. Whether you explore the lakefront and the Cuyahoga River by boat or by land, you will see first-hand how the natural resources that made Cleveland an industrial powerhouse are now transforming the city into a dynamic waterfront destination.

With a creative culinary scene, new hotel properties, active outdoor spaces, and a walkable downtown, the city has the basics covered for an ideal getaway. But Cleveland goes beyond the basics. Once you arrive, you’ll find a welcoming lakefront city where interesting experiences can be found around most every corner. From sports and music to world-class arts and culture (without a hint of world-class ego), you can experience the passion, creativity, and authenticity of this lakefront city with a visit. 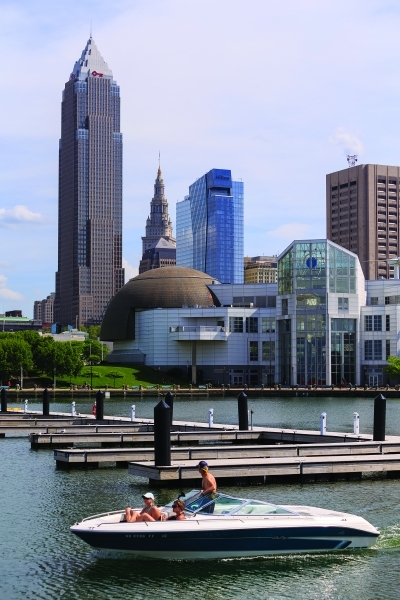 North Coast Harbor
Where the City Meets the Lake 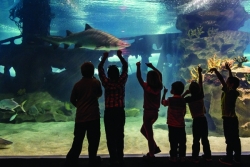 Downtown Cleveland meets Lake Erie at North Coast Harbor, which includes some of the city’s most notable attractions. The world’s only Rock & Roll Hall of Fame, Great Lakes Science Center and FirstEnergy Stadium, 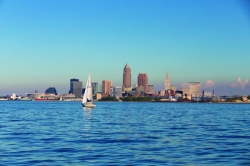 home of the Cleveland Browns, sit side-by-side along the lakefront. Voinovich Bicentennial Park juts into the harbor off East 9th Street Pier and makes for impressive skyline photo opportunities, including an iconic Cleveland script sign for selfies and group photos.

Built in 1995 and designed by world-renowned architect I. M. Pei, the Rock & Roll Hall of Fame celebrates 25 years on the shore of Lake Erie in 2020. It is only fitting that during this milestone year, the annual induction ceremony will also be held in Cleveland on May 2, 2020, bringing rock’s greatest stars and biggest fans to the city to celebrate. You can immerse yourself in numerous exhibits throughout the seven-floor museum. Grab a front row seat for performances by rock gods in the Power of Rock Experience, vote for future Rock Hall Inductees in the Hall of Fame exhibit, and bring your dream of being a rock ‘n’ roll star to life at “The Garage,” one of the newest additions. The interactive exhibit invites you to play, record, and mix your own hits on drums, bass, guitars, keyboards, and mixing boards. 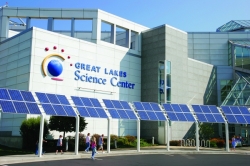 At the neighboring Great Lakes Science Center, you can explore science, technology and engineering with hundreds of interactive exhibits. Get a close-up view of the 1973 Skylab 3 Apollo Command module in the NASA Glenn Visitor Center, climb aboard a historic Great Lakes freighter and learn about Cleveland’s maritime history on the restored William G. Mather steamship, and see an immersive film at the Cleveland Clinic DOME Theater, which features the world’s first giant three-projector laser-illuminated cinema system and a screen that reaches six-stories high. 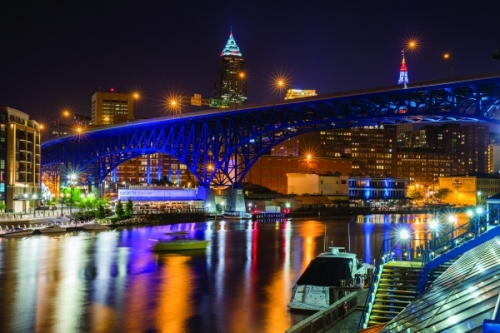 For waterfront dining, you can visit Nuevo Modern Mexican Tequila Bar, which sits on the East 9th Street Pier. It offers a nearly 360-degree view of the downtown skyline and lakefront and multiple patios where you can soak up the one-of-a-kind scenery. For an elevated view, head further inland to the soaring Hilton Cleveland Downtown Hotel and its Bar 32. Take the elevator to the 32nd floor to enjoy craft cocktails, hand-selected charcuterie and cheese from around the world, and a variety of small plates in a contemporary space with floor-to-ceiling views of Lake Erie and the city. 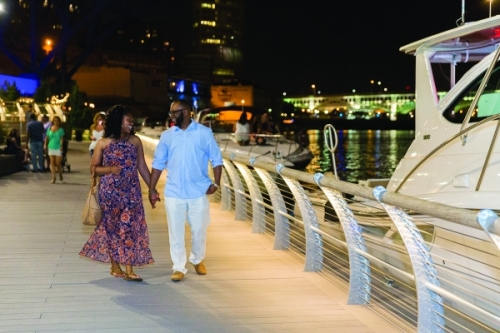 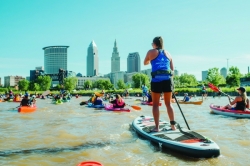 The Flats East Bank, a mixed-use development near the point where the winding Cuyahoga River meets Lake Erie, showcases a significant rejuvenation of the former industrial and warehouse space. Residents and visitors flock to the area for the waterfront boardwalk, riverside dining, and buzzing nightlife scene. During the warmer months, boaters dock along the river banks to visit popular dining and entertainment destinations including Collision Bend Brewing Company, named for the infamous sharp turn in the river; made-to-order pizza at Dante’s Inferno; a never-ending party at Margaritaville; entertainment at Punch Bowl Social and Big Bang Dueling Piano Bar; and Lindey’s Lake House, which strikes a perfect balance between casual and formal dining.

Cruise over to the Flats West Bank via a seasonal water taxi and you can catch a concert at the open-air Jacobs Pavilion at Nautica, explore the Great Lakes’ ecosystem and other water environments at the Greater Cleveland Aquarium or grab dinner with live entertainment at Music Box Supper Club. 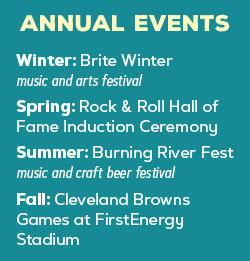 Dock Around the Clock

Whether you wish to spend a few hours or multiple days exploring Cleveland, there are multiple boat docking options.

The Rock and Dock Marina at North Coast Harbor is a 53-slip transient dock and marina that offers hourly and overnight boat slip rentals, as well as a laundry room, showers, and a convenience store. Plus, with secure, gated access and onsite security, you can explore the city with peace of mind. You can also catch a sunset cruise or rent jet skis, kayaks, and paddle boards at the marina.

West of the city you’ll find the Metropark’s Lakefront Reservation, including Edgewater Park Beach and Edgewater Marina and Boat Launch. The Marina provides electric and water at each dock, a pump out station, transient and gas docks (diesel and unleaded gas with ValvTect additives available), a bait shop, and a snack bar.

Find out more at ThisIsCleveland.com.