Your Chance To Say NO!

Offshore wind is known to cost four to six times more than traditional fossil fuel-based plants. The argument that people are willing to pay more for "cleaner" electricity, is a pipe dream offered by wind developers and sold to the most gullible. The electricity is clearly NOT cleaner, and always requires 100% back up from reliable hydro, gas, diesel, or nuclear facilities. What purchasers might not know is that they are actually paying more for a product that is essentially dirtier and with zero societal/environmental benefits.

The five turbines at Block Island have failed miserably to produce long term viable jobs, and the 300 or so temporary construction jobs are now obviously obsolete. Manufacture of the Block Island turbines included blades from Denmark; nacelles made at a GE facility in France, which were then shipped across the Atlantic to Rhode Island by boat; and "the turbines' white towers arrived by cargo ship from Aviles, Spain. That ship also carried all of the parts to the final site." If we think we can expect a different chain for Icebreaker, think again. 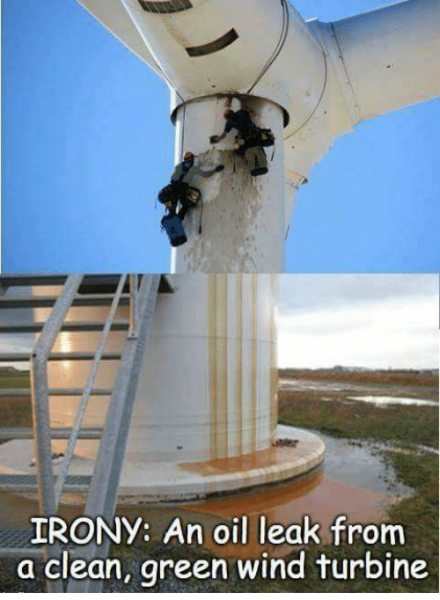 A single 3MW Wind Turbine needs: 335 tons of steel; 4.7 tons of copper; 1,200 tons of concrete (cement and aggregates); 3 tons of aluminum; 2 tons of rare earth elements, and more – all of which are between 73-100% imported. Each turbine can contain up to 700 gallons of oil and lubricants, which leaks (into the lake) and needs to be replenished. The blades are non-recyclable carbon fibre.

>> Completely the child of fossil fuels. Not clean, not free, not green!

Turbine fires are much more common than believed, and about 10 times more frequent than reported. Imagine a fire in the Great Lakes.

THIS IS YOUR CHANCE TO SAY NO! NO to environmental and, in many cases, irreversible damages. NO to loss of space and perimeter loss of habitat. NO to loss of water quality. NO to vast cost for a useless demonstration project with sinister future plans. NO to more subsidies going to a foreign billionaire wind turbine developer. NO to loss of amenity to boaters, fishermen, birders, dwellers and OH taxpayers. NO to an utterly useless proposal!

Contact: Save Our Beautiful Lake at www.saveourbeautifullake.org OR Great Lakes Wind Truth at www.greatlakeswindtruth.org.