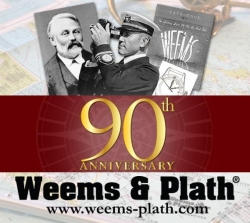 Weems & Plath, one of the oldest marine companies in the United States, is proud to announce its 90th anniversary. Over the course of 90 years, Weems & Plath has always been headquartered in Annapolis. What started modestly in the home of Captain Philip Van Horn Weems and Margaret Thackray Weems on State Circle (only 3-miles from the business’ current location in Eastport which overlooks Back Creek), has grown into an international company with hundreds of dealers worldwide.

Since 1928, when Captain Weems opened what was then named, Weems System of Navigation, Weems & Plath has served the boating and navigation community.

The early days of Weems & Plath were dedicated to navigation and weather instruments. Always with an eye toward innovation, Weems & Plath has continuously added products to their line while staying true to it’s roots of traditional navigation. Today, the company offers over 400 products, including a new line dedicated to boating safety.

Over the course of their 90th anniversary year, Weems & Plath will sponsor a trivia contest on their web site, weems-plath.com, with fascinating questions about the rich history of the company and its founder. For example, did you know that Captain Weems is the center of a Time & Navigation display at the Smithsonian Air & Space Museum in Washington D.C.?

Weems & Plath will also launch a photo contest in the spring, which asks customers to submit photos of any past or present Weems &Plath products they own which will be shared on social media for the public to vote on. To find out more about the particulars of their anniversary activities, follow Weems & Plath’s Facebook page at: www.facebook.com/WeemsAndPlath.

Weems & Plath’s President, Peter Trogdon said, “We are very grateful to our customers who have remained loyal and have helped us reach this milestone. I believe that our longevity is due to the fact that our customers know that we love boating and want to create products that will make boating more enjoyable and safe.”

Weems & Plath has been a trusted manufacturer of fine nautical, safety, and navigation products since 1928 and is headquartered at 214 Eastern Avenue in Annapolis, Maryland, 21403.