US Sailing Honors Association Award Winners for Contributions to the Sport

The annual US Sailing Association Award winners were celebrated the evening of February 6 aboard the USS Midway in San Diego at the US Sailing Awards Night Celebration. Award winners were honored for their contributions to the sport of sailing in the United States. To celebrate the accomplishments of these individuals and organizations, US Sailing recognized them as part of the 2020 Sailing Leadership Forum in San Diego. 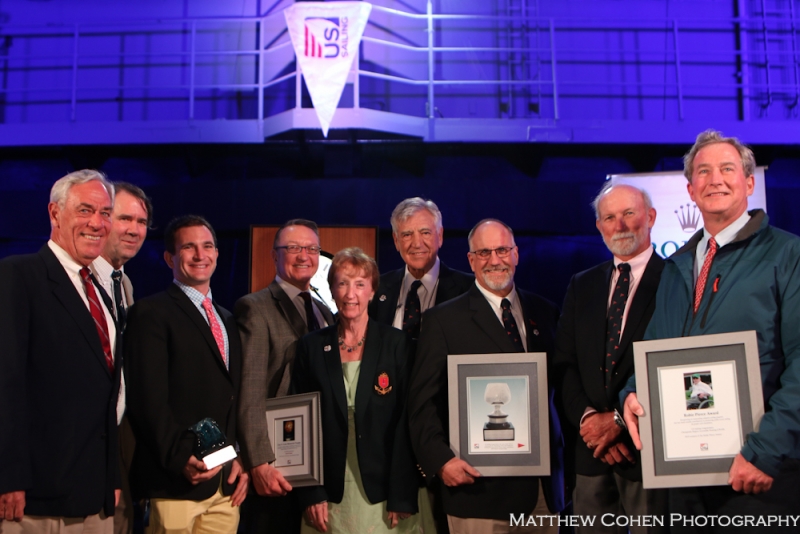 Dave Perry (Southport, Conn.), through his great contributions, has been an inspiration to the sport of sailing. He is being awarded the Nathanael G. Herreshoff Trophy due to his passion for the sport, which is witnessed in everything he does to help make sailing the best possible experience for those who choose to participate. Perry has actively participated in every aspect of our sport as a competitive racer, coach, rules advisor, National Judge, author, and volunteer for US Sailing.

Perry has been conducting racing clinics and rules talks around the world to make the Racing Rules of Sailing more understandable for all. He authored two books on the rules, Understanding the Racing Rules and Dave Perry’s 100 Best Racing Rules Quizzes. Additionally, he was the Rules Adviser to five America’s Cup teams and for the US Sailing Team at the 2008 and 2012 Olympics. This has inspired countless sailors over the years to learn the rules and to properly navigate them while competing with a Corinthian Spirit.

As a volunteer of US Sailing since 1977, Perry continues to ask questions on how the leadership can continue to push the sport further. He has and will continue to change the sport for all levels and sailors of all ages.

Kevin Broome (Rye, N.Y.) has over two decades of experience in the sailing industry as an instructor, coach and program director. He has worked in almost every aspect of the sport, having spent time working as the Promotions and Sales Manager for Bic Sport North America, coaching for both Providence College and the Fort Adams Sailing Team, and serving as the Sailing Director for American Yacht Club in Rye, New York, a position he still holds today.

As a member of US Sailing’s National Faculty for the past 10 years, he has helped shape several of US Sailing’s instructional programs and was instrumental in the development of the Level 3 Head Instructor Program. Additionally, he was heavily involved in US Sailing’s recent changes to the Small boat Level 1 course, serving as one of the ITs for the first-ever course to include the use of Teaching and Coaching Fundamentals Online.

He has written content for numerous books and is always seeking to improve his, and US Sailing’s, programming. He is selfless, dedicated and exceptional at what he does, and the contributions he’s made have impacted programs across the country. In almost any sailing program, you can find a small boat instructor that was trained using materials that Kevin helped create.

Dick Rose (Seattle, Wash.) was awarded the Harman Hawkins Trophy for his contributions to the sport of sailing in the field of race administration.

Rose is well known to sailors, but because so much of his work is behind the scenes, it’s difficult to appreciate just how much he contributes. He has been an active National Judge for 41 years. He is a member of his association appeals committee and serves as the secretary of the US Sailing Appeals Committee.

He was chair of the US Racing Rules Committee for many years, including the milestone year of 1997, when he guided the development of the reorganized “New Rules.” He is also chairman of the World Sailing Racing Rules Working Party and the Case Book Working Party.

Every four years, Rose painstakingly compiles The Racing Rules of Sailing and US Prescriptions for publication by US Sailing, then participates in proofreading the final version of our rulebook.

A past Nathanael G. Herreshoff Trophy winner, Rose has written a monthly column on the racing rules for Sailing World magazine since 1984.

In all of those capacities, Dick puts in a 40-hour week (or more) every week of the year, year in and year out. All of this work is done as a volunteer, without compensation.

Event chair Peter Gerard and Commodore Dan Faria were recognized by the competitors for their leadership: “Peter and his team… deserve gold medals for what they have done for the sport of sailing. I’ve been to many events, but this left me with such a great feeling,” wrote one skipper.

The race committee team, led by Principal Race Officer Mark Foster, delivered a total of 45 fair and safe races for five classes in varying conditions in Rhode Island Sound. The committee hit their target times for each race, which included windward-leeward courses with offset and gate marks, and a distance race back into the harbor.

Competitors praised the organization of the event, which began three years earlier. One commented, “The regatta was challenging to organize and execute, yet Ida Lewis accomplished it with aplomb. Their handling of logistics before, during, and after the event was outstanding – a fleet of nearly two dozen twelves sailed safely and competitively – a credit to RC and the competitors, but especially to the host, ILYC.”

Spencer Raggio (Malta, N.Y.) has well over 20 years of involvement and leadership as a charter member in the Y-Knot Adaptive Sailing program on Lake George. Y-Knot is a program established in 1996 by sailors with disabilities and their supporters who wanted to create an accessible sailing program in the greater New York state capitol area. In partnership with YMCA Camp Chingachgook, Y-Knot identified the perfect location for waterfront access, logistical support and accommodations for the sailing program activities and special events. Raggio has worked tirelessly to help grow the fleet to include six adaptive Martin 16s, three Sonars, as well as the construction of the Sidford Family Pavilion. Raggio was instrumental in the Y-Knot becoming one of the first US Sailing Accredited Adaptive Sailing Centers. He frequently helps Y-Knot sailors get to Newport, Rhode Island, Oyster Bay and Long Island, New York, and Chicago for regattas, and helps engineer adaptations everywhere he goes. He has worked closely with Gene Hinkel, Steve Avery and Bam Miller to expand, improve and refine adaptations for seating and steering systems for the Sonar and other boats as needed.

Raggio chairs the advisory Committee for the Y-Knot program at Camp Chingachgook, and took the lead in Y-Knot’s grant application for a new Sonar sailboat from the Clagett Foundation, which they received. He teaches sailing to able-bodied people to help fund adaptive sailing at Y-Knot and is always enlisting new volunteers to help.

Raggio is a major contributor in a new crowd-source adaptive sailing equipment website and was instrumental in making US Sailing’s website ADA compliant. In his spare time, he keeps busy by volunteering on US Sailing’s Adaptive Sailing National Faculty, as well as Chairing both the US Sailing Para Sailing Committee and Para Sailing Championship Sub-Committee.

Chesapeake Region Accessible Boating (CRAB) in Annapolis, Md. was founded in 1991 to provide the thrill, freedom and therapeutic value of sailing to those with disabilities, recovering Veterans or military service personnel, and at-risk youth. The organization was founded by Don Backe, a lifelong sailor who was paralyzed in a car accident. Backe took his enthusiasm for sailing and built an organization that could share the joys and empowerment of sailing with others who faced life altering challenges.

Today, CRAB provides sailing experiences and instruction to hundreds of guests annually from its base at Sandy Point State Park in Annapolis, Md. Last year was notable for CRAB, as they hosted to 26 different non-profit or governmental organizations which support people with disabilities, wounded Veterans, and children from at-risk communities. Over the past 12 months, they taught sailing to over 1,000 guests, family members, and caregivers with over 60% of the guests having a disability of some kind.

CRAB gained the support and financial backing of the governor and state legislature of Maryland, Anne Arundel County, and the City of Annapolis for the acquisition and construction of their new Adaptive Boating Center. The new facility will have state of the art training equipment and lifts for guests with disabilities, including wounded Veterans who will be learning to sail with CRAB on their adapted Beneteau First 22s. The new Adaptive Boating Center is set to open in 2020.

Thanks to the efforts of CRAB, community leadership, and volunteers, the access and equality that CRAB provides to those who would not otherwise have the opportunity to learn how to sail on the Chesapeake Bay has become a reality.

Mary Von Conta (Southport, Conn.) has served sport in almost every way possible. She’s been the parent of a sailor, a club volunteer, a Junior Sailing Program Chair, a Board member (and the chairperson) for the Junior Sailing Association of Long Island Sound, a Regional Training Coordinator, a mentor, role model, teacher and, to quote the nominator, “the all-around voice of reason on Long Island for over five decades.”

She has worked tirelessly to promote professionalism among sailing instructors and has recruited some of the best Instructor Trainers from around the country to teach US Sailing courses in her area. She has also pushed hard to have more powerboat training in the sound, helping to establish a requirement that all instructors must have taken a US Powerboating Safe Powerboat Handling course if they wish to teach. Not satisfied, she pushed host clubs to run higher level US Sailing training courses. Through her efforts, Long Island Sound now supports several Level 2, Level 3, Reach and Adaptive courses each year.

This year marks the second time that Von Conta has received this award, with her first recognition coming in 1999. The only two-time winner of this award, her legacy is one of incredible perseverance, dedication and substantial impact that can be seen in the generations of sailing instructors she’s influences and the clubs she’s helped support.

The United States Sailing Association (US Sailing), the national governing body for sailing, provides leadership, integrity, and advancement for the sport in the United States. Founded in 1897 and headquartered in Bristol, Rhode Island, US Sailing is a 501(c) (3) non-profit organization. US Sailing offers training and education programs for instructors and race officials, supports a wide range of sailing organizations and communities, issues offshore rating certificates, and provides administration and oversight of competitive sailing across the country, including National Championships and the US Sailing Team. For more information, please visit www.ussailing.org.