TowBoatUS Detroit Has New Owner with a Familiar Face 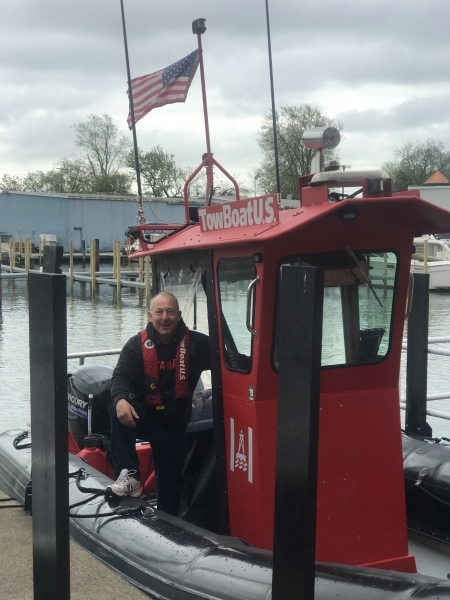 TowBoatUS Detroit, the on-water towing and assistance service for recreational boaters has a new owner, but the face may be familiar. Local boaters may recognize Capt. Jeff Pidcock, owner of Damark Marine Specialties in Gibraltar for more than 20 years, as the new owner of the boater-assistance service that’s part of a network of 41 TowBoatUS locations on the Great Lakes and 300 across the country. Pidcock purchased TowBoatUS Detroit from Capt. Brian Williams. The two have worked side-by-side within the local recreational boating industry for years.

“Brian often brought vessels to Damark for repairs and service,” said Pidcock, whose operation includes a small marina and authorized sales and service for Mercury, Volvo Penta, and Yamaha engines, as well as a fiberglass, electrical and paint shop. It was a natural progression for Pidcock when Williams desired to step away from the business located in Wyandotte that provides 24/7 help when boats break down and need a tow, battery jump, fuel drop-off, or soft ungrounding help.

Much like an auto club for recreational boat owners, BoatUS offers an Unlimited Freshwater Towing Membership for just $72 a year. Boaters face costs that average $750 per towing incident – with some paying into the thousands out of pocket – when they don’t have an annual BoatUS Towing Membership.

Pidcock maintains a fleet of six red high-speed response vessels with the TowBoatUS name and logo emblazoned in bright white letters on their sides. The largest is a 30-foot Almar with water-jet propulsion that allows for shallow-water operation. “All of our professional U.S. Coast Guard-licensed captains remain with us,” added Pidcock. Separate from BoatUS on-water towing services, Pidcock’s company also refloats sunken boats and provides salvage services.

Pidcock says boaters ask for routine on-water assistance for many reasons. “Winds out of the west can drop water levels quickly, leaving them stranded on a beach. When boaters give way to larger boats in channels, they sometimes run into shallows just outside the marks. Boaters also like our waterfront concerts, but they may not realize until it’s too late that their battery has died and they need a jumpstart at 1 a.m. We are there any time of day or night to help.”

Boaters can reach TowBoatUS Detroit by hailing on VHF channel 16, by calling the company directly at (734) 675-0710, by phoning the BoatUS toll-free 24/7 Dispatch Center at (800) 391-4869, or via smartphone using the new BoatUS App. More information can be found at BoatUS.com/Membership