The Evolution of PlasTEAK, From Prototype To Innovation Awards

THIS is the 25th year for PlasTEAK. Who would have guessed? As always with new companies, it started with a spark. Bill Gribble looked at a recycled plastic bench and saw a swim platform. He took a chance, had one built, and together, he and I took it to the Cleveland Boat Show.

Back then, the show was 10 days long and the booth had people three-deep every day, even though Bill and I weren’t quite sure how long it would take to build the platform, how to price it precisely, or how to install it on every type of boat. That first year, we sold one PlasTEAK Platform. We drove it out to Pennsylvania in the snow and installed it in the mud. It took two days. 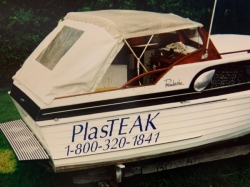 Not long after that, the printing business Bill ran with his parents was sold and they retired. The shop morphed into a production facility for PlasTEAK, carrying over what was needed and letting go of the rest. Of course, we put our platform on our “new” boat, a 1958 wood Pembrook. It had tall sides and became our billboard with “PlasTEAK” in two-foot letters on the side. It was several years before we could pay ourselves, so Bill sold printing during the day, went to baseball games in the afternoon, and built platforms in the basement at night. After we took over the print shop, our first website (www.plasteak.com) was created, creating a firm footprint on the internet and allowing many people to come to us just when we needed them. 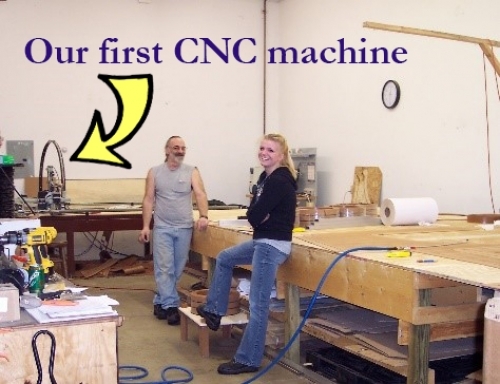 In 2004, PlasTEAK was approached by a company from England that wanted us to sell their synthetic decking. We tried it for two years, after which, their production was not keeping up with our demand. To keep up, we started making our boat decking on this side of the pond, and PlasDECK was born. It took about a year to get the right formula, color, and texture for Bill to say, “That’s it.” We outgrew the print shop and rented space next door. Then, in 2006, PlasTEAK bought a building by the tracks that had been empty for 16 years.

We sold decking like crazy and poured money into the 43,000 square foot building. In September of 2009, we got occupancy, but then the bottom fell out and the fax started spitting out order cancellations. It was the only time we had to lay people off; we tried to be kind, but it was a sad time for all. Bill was not to be stopped though. The following fall, PlasDECK earned an Innovation Award at the IBEX show and we were off to the races again. We hired back as many former employees as wanted to come back, and many of them are still with us. 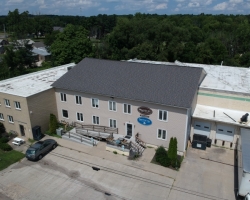 We now have installers from coast to coast and Canada, too. We are represented in Europe and have even defended ourselves in Federal Court and came out ahead. In 2012, we started our own extrusion company to ensure that PlasDECK is always manufactured to our high standards of quality. PlasDECK’s latest innovation, the Eco Series, is a winner of the 2018 Innovation Awards at the Miami Boat Show. Eco is made of the same high-quality material as standard PlasDECK, but, since the bottom layer has recycled content, the price point is lower.

We have learned much along the way, mostly about the value of the people around us. They are the company. Their care at every step in the process makes it possible for us to go to shows confidently bragging that we are the best—and we are the best. Our vendors, employees, customers, advisors, and fellow boaters are all connected. Together we make boating more fun.

Become part of our family AND have amazing flooring by visiting www.plasteak.com or www.plasdeck.com today!