The July 4th weekend brought the Tall Ships Challenge, an annual series of tall ship races and maritime port festivals geared towards celebrating maritime history, to the Port of Buffalo for four days of parades, tours, exhibitions, and festivities.

Mid-afternoon on the 4th witnessed a parade of 12 majestic and historic tall ships into port in two locations of Buffalo’s ever-growing and vibrant inner harbor. Led by the Spirit of Buffalo, a 73-foot steel topsail schooner and the home-port host ship, the parade of sails included: The Flagship Niagara, an accurate reproduction of Commodore Oliver Hazard Perry's victorious flagship from the War of 1812; HMCS Oriole, the oldest commissioned ship in the Royal Canadian Navy; the Empire Sandy, a three-masted schooner out of Toronto and a converted steel deep-sea salvage tug that saw service in the North Atlantic with the British Navy in World War II; the St. Lawrence II, a 72' purpose built outdoor education vessel; the Pride of Baltimore II, a reconstruction of an early 19th century Baltimore Clipper; Appledore IV, a steel-hulled 85-foot gaff schooner; the Bluenose II, a replica of a legendarily fast Grand Banks fishing schooner and a Canadian national symbol, depicted on stamps and her nation’s ten-cent coin; the Appledore V, a steel-hulled 65-foot gaff schooner; the Denis Sullivan, a traditional Great Lakes topsail schooner; and the Picton Castle, a beautiful three-masted square-rigger currently on her seventh circumnavigation of the globe. The event also included the NAO Santa Maria, a new replica built in Spain of the Spanish three-masted deep water ship that was the flagship of Christopher Columbus’ exploration fleet. Upon entry to the harbor, each ship was greeted by a pipe and drum core and cannon salute. 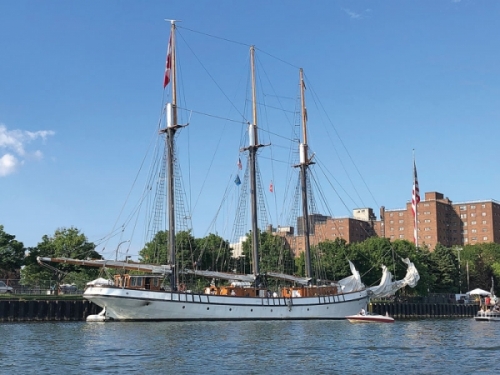 Making their first ever port appearance in Buffalo, these majestic tall ships from throughout the US, Canada, Spain, and the South Pacific bring awareness to the largest bodies of freshwater in the world and offer both education and adventure through tours and sailing excursions. Several had berths available for a few lucky participants to spend some additional time on the vessels. 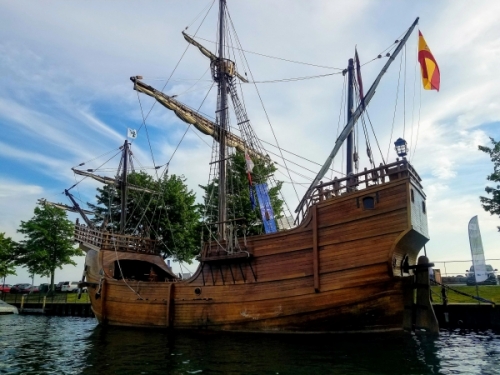 Tall Ships America is based in Newport, R.I., with a mission to encourage character building through sail training, promote sail training to the North American public, and support education under sail. They work with tall ship owners and operators, crew, and corporate sponsors to focus on youth education, leadership development, and preservation of the maritime heritage of North America. Founded in 1973 and commended by Congress as the national sail training organization representing the United States, Tall Ships America offers access and scholarships to many programs including some with possible academic credit in marine biology as well as marine science, maritime history, ocean ecology, navigation, seamanship, and adventure travel.