One Foot, Two Oceans, One Day

Not all tropical sailing vacations are alike. Sometimes the fun is the blue water and rum drinks of the destination, but, other times, the journey is the adventure. This was the case during a recent trip to help two cruising couples bring their boats through the Panama Canal. 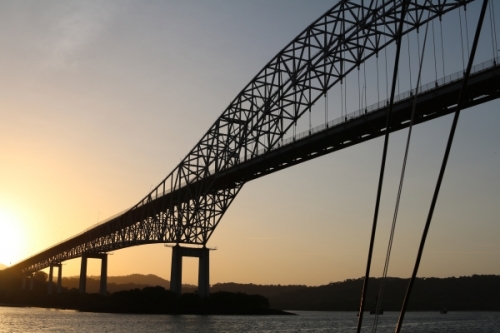 This was a ‘bucket list’ trip for my wife and myself. Just the thought of transiting between oceans through the century-old passage offered plenty of intrigue. For our cruising friends from the Great Lakes, the canal also marked a significant stage in their world cruise because entering the Pacific would mark a major step in realizing their cruising dreams.

We first hooked up with them at a hotel in Panama City on the Pacific side of the canal. They left their boat at Shelter Bay Marina on the Atlantic side to meet us and apply for a long-term French Polynesian cruising visa. The city itself was crazy. I pictured grass huts on the beach, but it turned out to be a stunning mix of towering skyscrapers and sprawling Latin American low-level housing. Judging by the size of the skyline compared to its population, it was obvious that clothes are not the only things getting laundered in Panama.

As it turns out, we were not the only ones interested in going through the canal. Five other Great Lakes sailing friends joined us. Thankfully, we had two boats, Uproar and Skabanga, to accommodate us all. Since a minimum of four crew are required to catch a monkey fist and tend lines through the locks, all hands were welcome. 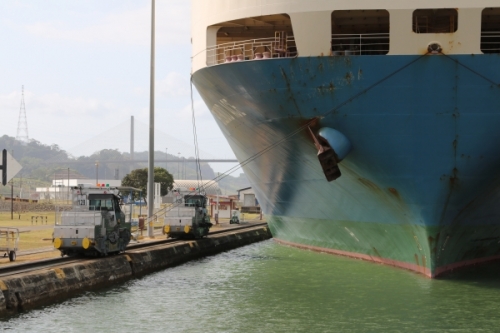 Once assembled, we climbed into a large van to travel to the marina on the Atlantic side. Part adult daycare, Shelter Bay Marina serves as a Pacific-bound launching point for most recreational boaters. Since the wait can be weeks, it becomes an organic community of world cruisers who meet at the pool each afternoon for water aerobics, cocktails, and sea tails. It is also tradition to paint their boat’s logo on an ever-evolving wall mural on the old sail loft building.

All recreational boaters are required to hire an Advisor to help them navigate the canal logistics. Freighter traffic rules here and we seemed more of a nuisance than a welcome part of the flow, so it’s not uncommon for cruisers to get bumped from one day to the next while awaiting their turn. Since all boats are required to carry large fenders and four 150ft “dock” lines supplied by the Advisors, the arrival of these items to your boat was a sure sign you’re officially in the queue.

The most common canal passage is to leave the marina midday, go through the first three locks before nightfall, and then spend the night anchored in Lake Gatun before continuing onto the Pacific side the next day. The canal is only 48 miles long, so generally it’s a two-day trip. Since the Advisors meet you on the water at the canal entrance, boaters anxiously wait to be told to motor out of the marina to await their arrival. 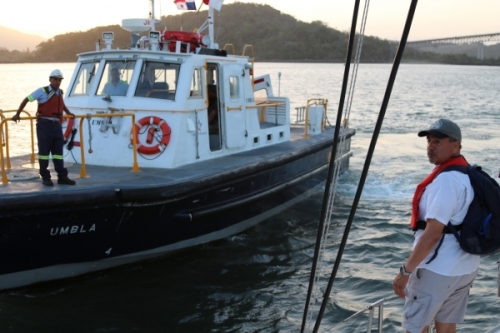 Our hope was to be paired up with our friends on Uproar for the passage, but that was not to be. They got the nod first and departed midday while we waited pool side. Very late that same afternoon, we got the word that we would be locking through first thing the next morning. As instructed, we headed out into the entrance basin to spend the night at anchor awaiting the pre-dawn arrival of our Advisor. This was welcome news, because we knew we’d at least be close behind our other friends.

On cue, we headed out and it quickly became evident why so much coordination was needed. Hundreds of freighters dotted the horizon awaiting their turn. Since the anchorage was on the other side of the main channel, we actually needed to ask permission to cross to avoid conflicts. Once across, we set the hook, had dinner, and watched the organized chaos. We knew we would be doing the whole canal in one day, so we hit the racks early that night.

Anxious with anticipation, we were all up when our Advisor, Franklin, arrived at 5:30 am. After a bit of fender and line sorting, we were off and told to follow a conspicuous light blue Maersk freighter into the first lock as the sun cracked the eastern sky. I took this chance to stick a foot in the Atlantic in hopes of doing the same later that same day in the Pacific. 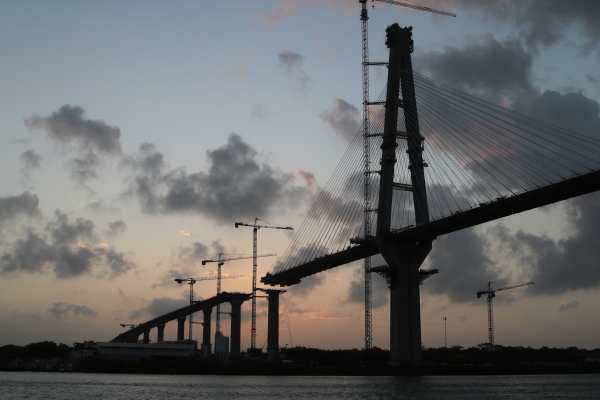 Advisors do not touch the helm but act more as communication and protocol coordinators between the canal authorities and us inexperienced gringos. As the largest of three cruising boats scheduled to lock through together, we were told to allow the other two to raft up on either side, so we could go through the locks tied together for space efficiency. This was a bit of a disappointment because our crew would be relegated to sightseeing, and not line tenders, after securing our raft mates. This also meant Captain Christopher would be the main driver of the raft, but, as expected, he skillfully maneuvered Skabanga and gang into the huge walls of the first lock despite a curious bit of driving by our French wingman on the starboard side.

The canal itself really only consists of six locks with a big lake in between. As the sun established itself onto another hot, tropical day, we completed the first series of three locks that took us up a total of 85 feet to lake level. Once through, we broke the raft to begin our trip across the lake towards the Pacific. As we came out of the last lock, someone noticed Uproar anchored off to the side, so we were now actually ahead of our friends who had left before us.

The trip through the freshwater lake was scenic but mostly uneventful. As we neared the Pacific side, we were asked to slow down a bit. Franklin told me to actually jump onto a giant ship mooring to secure lines so we could wait in place. A first for me, the buoy turned out to be more than buoyant enough to hold my weight and, after wrangling the boat into a cross-tie, we settled in for lunch. About an hour later, our friends on Uproar came up from behind and tied off next to us, but almost as soon as they were secure, we were told we needed to untie to start moving toward the final three locks. 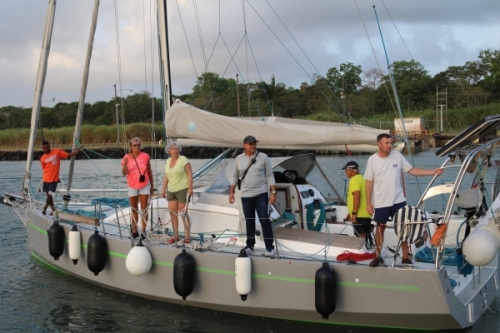 It was along this last stretch of the canal where the labors of original builders was most evident. A deep man-made gorge towered above Skabanga as we re-joined our raft mates for the final three locks. Once again, Captain Chris expertly maneuvered Skabanga while directing the other skippers to help him control the raft. This time we were the first vessels into the lock, so we were led to the very front of the 1000 ft-long basin, stopping feet from the ancient doors. This left just enough room for a giant car carrier to come in behind us. As her enormous bow closed in, it really put a dramatic perspective on the size of these floating behemoths.

As we entered the last of the three Pacific side locks, we realized we were the main attraction for a cruise ship day trip as hundreds of spectators filled stadium-like seating at the canal’s visitors center. Who knew locking through a canal is a spectator sport? As the water drained, the crowd disappeared behind the emerging wall of the canal and, shortly afterward, the enormous gates slowly parted revealing the vast Pacific before us.

Exiting the last lock, we once again separated from our raft partners and headed to a busy mooring area next to the famous Bridge of the Americas, which connects north to south. A tender boat rapidly approached to pick up Franklin and, as quickly as he arrived, he was gone. Finally secured to a mooring, we poured cocktails to celebrate our friends’ first night in the Pacific. As the sun set, I took my chance to stick the same foot in the Pacific and fulfill my personal ‘one foot, two oceans, one day’ dream.

About the Author:
Ken sails his T10, Eclipse, out of McKinley Marina in Milwaukee. He races regularly with the South Shore Yacht Club and MAST sailing club.