The best blind sailors in the world will gather on Lake Ontario at the start
of September to compete for the 2019 Blind Fleet Racing World
Championship.

The teams will race on Shark 24 keelboats, all equipped with North Sails
inventories, and representatives of the North Sails Toronto loft will be
onsite supporting the event and helping the participants to get the best
sailing experience as well as push themselves to peak performance in the
battle for the 2019 crown. 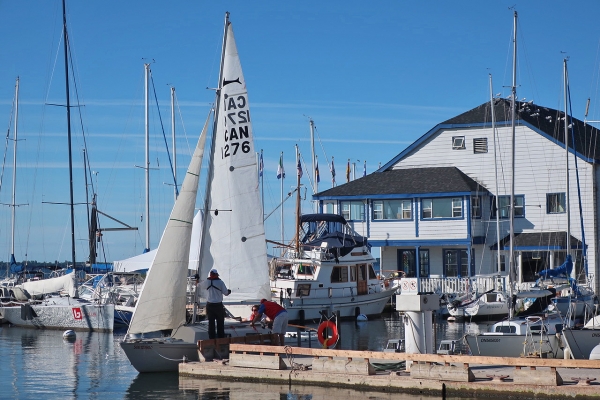 The first Blind Sailing Worlds in Canadian waters will be hosted by the Kingston
Yacht Club (Ontario, Canada) from September 1 st to the 8 th . One week of racing
will see teams representing Australia, Canada, France, Japan and United
States compete on Lake Ontario. As part of its global support of disabled
sailing, North Sails will be represented by its team of experts from the Toronto
loft, the leading sailmaker in the region.

The ethos behind the Blind Sailing Worlds matches with the ‘Go Beyond’ that is
the motto moving North Sails since the founding of the company back in 1957.
“A blind sailor is certainly going beyond!”, explains George Jackson, the North
Sails representative for the Kingston area and the North Sails spokesperson at
the Blind Sailing Worlds. “For sighted sailors, it&#39;s easy to see the challenges
these unsighted sportsmen are dealing with, but then to race a boat takes that
appreciation to a whole different level. The talent of these blind sailors is off the
charts.”

One Design
The 2019 Blind Fleet Racing World Championship will be raced on 24ft Shark
class keelboats provided by the Kingston Yacht Club. Crews comprised of four
people – two visually impaired and two sighted – will race over one week on
Lake Ontario, starting September 2nd. The event’s rules state that the
helmsman and the main sheet trimmer have to be visually impaired, and both
the tactician (who is not allowed to take part in the sailing of the boat) and the
jib trimmer are sighted.

The Shark 24 is a very popular sailing boat on Lake Ontario. This 24ft keelboat
is one of the over 300 One Design classes in the North Sails portfolio, and the
current World Champion – CAN335 skippered by Stephen Jones – is a
testament for the quality of the product. North Sails’ inventory for the Shark 24
class includes All Purpose Mainsail, three different Headsails and Spinnakers.
More information about North sails for the Shark 24 can be found here.

As a key part of the global network of lofts, sailmakers and agents around the
world, North Sails is the leading sailmaker in the Ontario region with
representatives in Toronto, Hamilton, Thunder Bay, Ottawa and Kingston.