The National Sailing Hall of Fame (NSHOF) recently announced the 10 people who will make up its 2019 class of inductees:

The members of the class of 2019 join 71 previously recognized individuals as the National Sailing Hall of Fame continues to fulfill its mission by drawing attention and recognition to Americans who have made outstanding contributions to the sport of sailing. 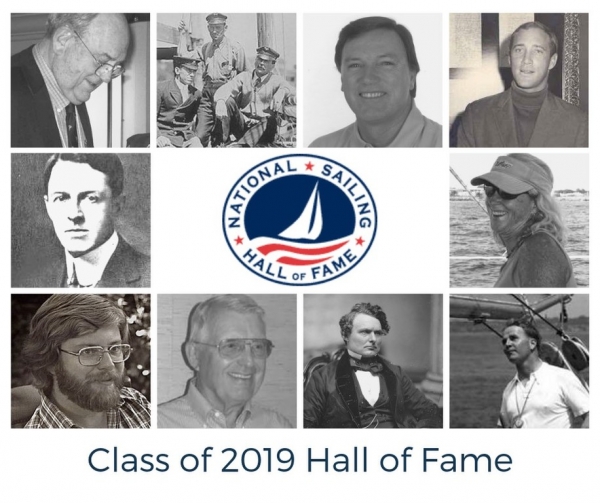 “We are proud to recognize and celebrate these Inductees and their extraordinary contributions to the sport we love,” said Gus Carlson, President of the NSHOF. “Their accomplishments set them apart, and their stories will inspire sailors for generations to come. Their commitment to excellence embodies the spirt and substance of the National Sailing Hall of Fame.”

After sailors from all corners of the country nominated their choice for induction, a selection committee – made up of representatives from US Sailing, the sailing media, the sailing industry, community sailing, a maritime museum, a previous inductee, and the NSHOF Board – reviewed a wide range of nominations. (Nominations are accepted year-round at nominate.nshof.org, with March 30 as the deadline for nominating someone for the current year.)

Inductees are American citizens, 55 years of age or older, who have made significant impact on the growth and development of the sport in the U.S. in the categories of Sailing, Technical/Design and Contributor (coach, administrator, sailing media). Nominations of non-citizens were also considered if they influenced the sport in the U.S., and posthumous nominations were also accepted, with a mandate (as of 2019) that three Inductees be deceased for 60 years or more as part of an effort to specifically recognize the forefathers of American sailing who helped shape the sport we know today.

The Lifetime Achievement Award inducts an American citizen, 55 years of age or older, who has had consistent involvement in sailing for a majority of his or her life and had success in the sport while also becoming successful and achieving noteworthy stature in a non-sailing career.

The undertaking to recognize Americans who have made outstanding contributions to the sport is central to the mission of the NSHOF which was formed in 2005 in Annapolis, Maryland. Earlier this year, the organization purchased the historic Armory on the waterfront in Newport, R.I. In a building that once served as the press center for the America’s Cup, a home to honor the heroes of American sailing will be created; preserving the sport’s past while engaging the next generation in its future. Interactive educational exhibits will provide real-world applications of STEM concepts that come alive through sailing; and visitors of all ages, non-sailors and sailors alike, will experience the magic that happens when wind and water meet.

The 2019 class will be formally celebrated on Saturday, November 9, 2019, with an Induction Ceremony hosted at Seattle Yacht Club, Seattle, Wash. The Induction Weekend has also become notable as a reunion of sailing’s Who’s Who as previous inductees join the celebrations to welcome their peers into the Hall of Fame.

For more on the Inductees, please visit: https://nshof.org/hall-of-fame/class-of-2019

The National Sailing Hall of Fame is a not-for-profit educational institution dedicated to: preserving the history of the sport and its impact on American culture; honoring those who have made outstanding contributions to the sport of sailing; the teaching of math, science and American history; inspiring and encouraging sailing development; and providing an international landmark for sailing enthusiasts. The NSHOF has partnered with US Sailing and the U.S. Naval Academy, and is associated with yacht clubs throughout the country, in its efforts to recognize role models of outstanding achievement. For more information, please visit: www.nshof.org