A Tour Of Vesper Marines Cortex 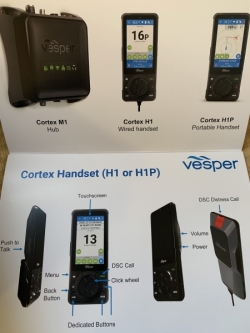 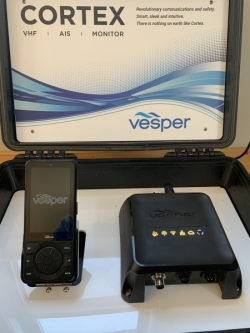 I have written before about the features of the new Vesper Marine Cortex and firmly believe that it is a truly innovative product. With my extra time indoors self-isolating, I decided to test out a demo unit the team sent me. The demo came in a suitcase with just a manual and power cord–it didn’t need to be attached to a VHF or AIS antenna like an actual unit would be. This one was set up to run simulation software, but other than that, the demo unit is identical to the production Cortexs that are to begin shipping shortly. It gave me a good chance to see how it works without the buzz of a boat show to distract me.

The first thing I noticed was the simplicity of the base station, everything was labelled intuitively, and I have no doubt that installing it should be as easy as “plug in the power cable and antennas and go.”

As far as the handset, the look and feel is closer to a TV remote control or a large smartphone than a VHF radio handset. Roughly two-thirds of the handset’s face consists of a 4-inch touchscreen, and it’s bright and easy to read in every mode. The buttons on the sides and face of the handset are easy to find and once you got familiar with it, it would be very easy to use in darkness or with gloves on. The sides of the handset are where the power, volume, and push-to-talk buttons are, which is pretty standard and doesn’t require too much re-learning to use, even in stressful situations. On the face, there are the standard DSC buttons on the right side: “Call”, “16”, and “MOB.” Call allows DSC calls to selected targets; ‘16’ is for immediate switching to Channel 16; and ‘MOB’ marks the man-overboard waypoint and alert button. 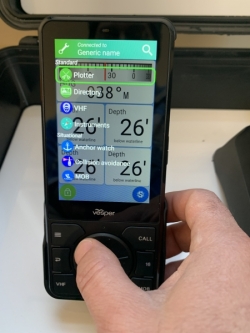 On the left side is the menu, back, and dedicated VHF buttons. In the center there is a dial and select button that, when combined with the touchscreen allow for complete control of the more advanced features. As this is primarily a VHF radio, across the top are status indicators listing VHF channel, status, WiFi, battery level, GPS connection, and any alarms. By selecting the menu button, the four standard modes (Plotter, Directory, VHF, and Instruments) can be selected. There are also three additional modes that are more useful in specific situations (Anchor Watch, Collision Avoidance, and MOB).

The demo was designed to provide AIS data for certain situations so I could get a feel for it, without the actual data coming in from other nearby traffic. On the plotter screen, nearby AIS targets such as ships and aids to navigation appear, showing range, bearing, and headings. The color of the targets show whether they’re a threat or not—either gray, yellow, or, if a collision alarm is triggered, red. 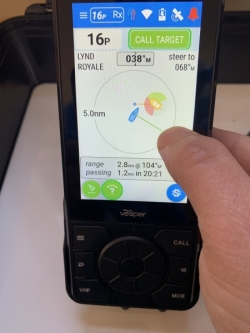 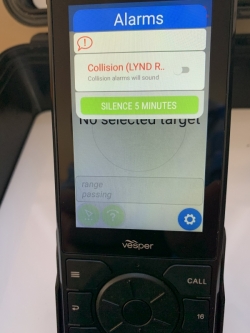 You can touch each target for more information or expand it for even more detail. DSC calling can be initiated directly from this screen without having to go anywhere else, which is really convenient. You can also go directly to the Collision Avoidance screen to see how to maneuver to avoid the target.
The great thing about Cortex is that it has been really thought through for ease-of-use. If you are on one page, you don’t have to go anywhere else for the primary functions of navigating or communication. Even if you click on a target and go to the Collision Avoidance screen, you can still tap an onscreen button to place a DSC call. If the Vesper SmartAIS functionality—located in the base station, which constantly calculates crossing situations—determines that there is a possibility of a collision, an alarm is sounded.

The Directory screen lists AIS targets by distance and still shows useful information like bearing and type of target. You can also group targets on this screen. 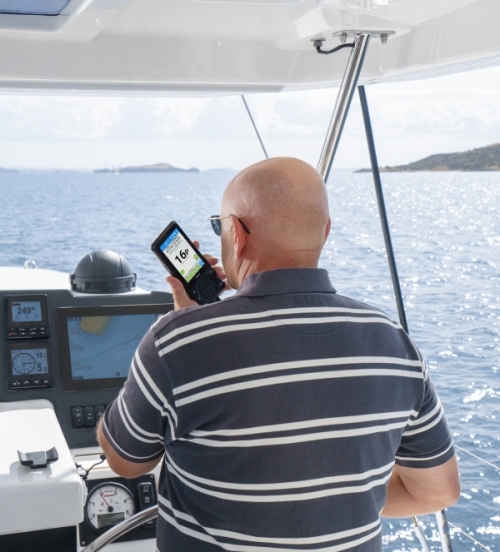 The most important mode is VHF, primarily because you are probably not going to be using the Cortex handset as your main navigation tool and will probably be monitoring targets from your MFD. This screen lets you set presets for frequently used frequencies and monitor two frequencies like 22 and 16 simultaneously. As I said before, all alarms are visible from every screen, so you don’t lose the important information. Once the target or frequency is selected, the PTT button on the left side of the handset works like any other VHF radio. The PTT button works to transmit, no matter what screen you are on.

One great feature of Cortex is that you can customize it to the situation and your style; so even if you are off-watch, keep the handset near your bunk so you can still see important alarms and monitor your instruments. You can also set it to Night Mode for easier visibility in the dark. Heading, speed-over-ground, course-over-ground, wind direction and speed, depth and water temperature can all be accessed depending on the sensors you have installed on your boat.

Vesper sets themselves apart from other AIS manufacturers with their SmartAIS functionality. I already mentioned the Collision Avoidance capabilities, but they also have Anchor Watch and MOB functionality that is incredible.

The Anchor Watch gives you total peace of mind. As you are pulling up to the anchorage, vital information is displayed on the Anchor Watch screen—like wind angle, depth, boat speed—and there is a circle allowing you to see if there are any targets in your area of swing. When you are ready, you just hit the ‘drop anchor’ button to mark where the anchor physically is and then watch the breadcrumbs mark your motion. You can also set the radius of your swing so that if your boat’s position drags outside of the circle, you’ll be notified. 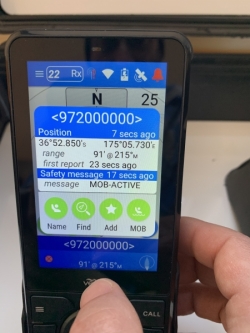 You can also trigger one of two different MOB alarms. If you hold the MOB button, a red flag is marked on your screen. This gives you range and heading to guide you back to that point, as well as a big, red button on the screen letting you immediately make a distress call. You can also program Cortex with your Personal Locator Beacon AIS information; if one of your crew falls overboard and triggers their beacon, an alarm will go off and the same info will be displayed, but with a red dot showing exactly where the person is. You can even personalize it to show the crew member’s name. The data on the MOB alarm is exceptionally detailed, giving you the best chance of getting back to your crew member in the fastest way possible.

I have to say I’m pretty impressed by what I see so far from Vesper’s Cortex. I’m looking forward to some more in-depth reviews and hearing customer testimonials as people get out and use Cortex to make their time on the water easier and safer.
www.vhf-reimagined.com

About The Author
Jordan Balbresky

A former public relations practitioner serving the high-tech and consumer electronics industries, Jordan Balbresky returned to the agency world following a decade of hands-on marine experience. Living in the Caribbean and working in all aspects of the marine industry—from boat building, restoration and maintenance, to charter captain and delivery crew of sailing and motor yachts—Balbresky has a first-hand understanding of the outdoor and maritime markets. Fully immersing himself in the industry, he is a licensed scuba instructor, as well as master mariner and has lived on-board a custom-built schooner while skippering charters on boats of all sizes in the US Virgin Islands.