Your Next Family Vacation: A Lake Cumberland Houseboat Trip 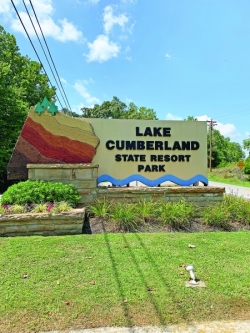 A “short” seven-hour drive from Toledo, Ohio, landed us at the State Dock Marina on Lake Cumberland – the houseboat mecca of the world! Fifteen of my family members met here, from all over the Midwest, to start our weekend adventure on the water.

Lake Cumberland is located in southern Kentucky, just west of Daniel Boone National Forest. It is one of the largest dam reservoirs in the country, measuring over 100 miles long from end to end, and over one mile wide at its widest point.

We arrived on a Friday for a three-night weekend rental on the biggest houseboat in the fleet, The Independence Series 1100, which proved to be a full 90 ft of floating luxury. Staying on this houseboat felt a lot like staying in a fancy hotel suite only you get to have the added bonus of floating on the water while enjoying your fresh sheets and beautiful surroundings.

Check-in was a breeze; State Dock Marina has it down to a science. You are given a check-in time and that is when you move everything to the boat. They had plenty of staff on hand to help push carts and even had a wheelchair for my grandfather to use to get down the steep hill.

Next came an unloading party! Loading food for 15 people was not an easy task, but we formed an assembly line from the dock to the kitchen to speed up the process. Storing all the food we brought wasn’t a problem as The Independence had a HUGE kitchen with everything you’d expect in a modern kitchen. 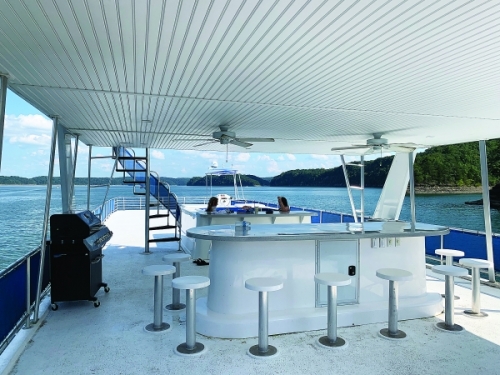 But, let me stop right here and brag on my Aunts and my cousin, Alex, for a second. They organized ALL of the food for us. This means from the shopping lists to the recipes, you name it. All of our meals were even prepared ahead of time by my Aunts and Alex. Boy, did that save us time in the kitchen. I’d highly recommend such a plan for large groups! Because of their foresight, we had a variety of meals ranging from Italian to Mexican, and more no-bake cookies than we could possibly eat in one weekend.

The living space was a lot more spacious than I had imagined. The sectional couch in the main living room easily sat 10 people. The front patio space was large enough to hold an enormous table complete with a ceiling fan for those warm afternoons. Go up a level, and we found another table, a 12-person hot tub, and a staircase leading to a slide off the back of the third level! 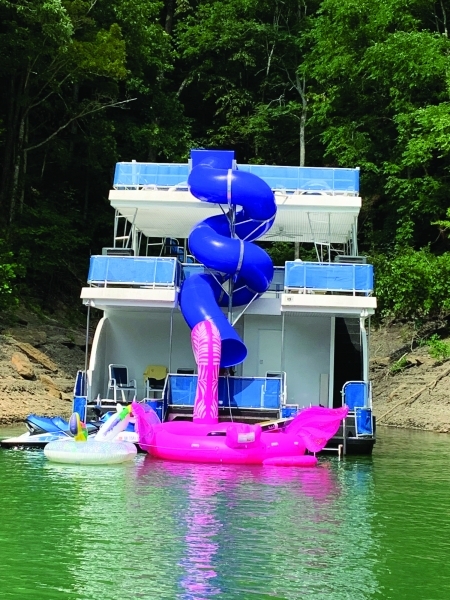 We also ended up towing a jet ski and a pontoon behind the houseboat; the former for added fun and the latter to make it easier to get to places on the lake that we wanted to explore.

After checking everything out, and everyone staking their claim among the eight bedrooms available, we got a quick once-over by a member of the State Dock Marina staff and we were off!

Once we were on the water, we immediately set out to find a good place to tie off for a night of jet skiing, swimming, and, of course, eating amazing meals!

I thought I would feel more nervous when going to bed that night, but the boat was so secure on the banks of the beach that I fell fast asleep... for a little while. We quickly learned that the rooms were either hotter than a sauna or ice-ice cold. Thankfully, we had brought extra blankets, so we were able to bundle up and sleep soundly. 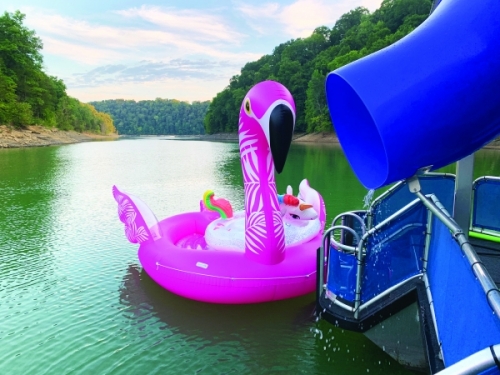 The next morning we decided to go out and cruise for a bit and find a new cove to stay for the night. A group of us wanted to go see the 76 Falls so we headed that way. 76 Falls is the largest waterfall on Lake Cumberland, measuring an impressive 37’ tall. Once we securely tied off, a big group of us headed out on the pontoon boat to the waterfall. Whereas we had hardly seen any other people while tied off in our cove the previous night, that changed quickly at the waterfall. Tons of people seemed to congregate at this spot, for good reason, so we had to tie off and swim to the waterfall. You can swim right under the falls, which my kids thought was “super cool” and was quite an experience for the rest of us.

That night included lots of jet skiing, paddleboarding, floating around, and just plain relaxing. The massive hot tub on the top deck was also a favorite, especially for the kids. I think they stayed in the hot tub until at least 9pm every night.

Another favorite toy ended up being our giant floating flamingo island. I had wanted my grandmother to be able to participate in the fun water activities, so this had been a gift to her when we arrived. She was thrilled and we even towed her around the cove with the pontoon boat. She loved every second of it!

The next day, we headed to our last cove of the trip. We stopped the boat along the way and let the kids (and the Erik-child) jump off the side of the boat. They even braved the very top deck! 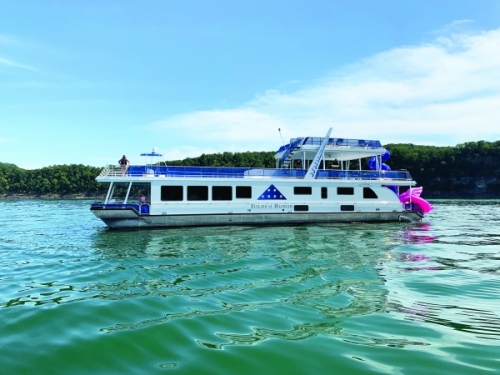 After finding a secure cove, we noticed a few guys walking around the shore looking for rocks. It turned out they were looking for geodes. Well, immediately, our kids had something else to occupy their afternoon, and we ended up with a big box of geodes to take home.

That evening, we ended up deciding to go back to the marina for the night because we all had to be up so early the next morning. As part of your checkout, you’re supposed to refuel in advance, so I decided to take off in the pontoon and head back to the marina before the houseboat except… I may have run out of gas before we made it back. Just remember, there are only a few spots to fill up your gas tank on the lake so make sure you pay attention to those gas gauges better than I did! A fellow vacationer towed me the rest of the way in though, so all turned out well.

We were all extremely sad to leave our house on the water, but we took away so many great memories of this trip. 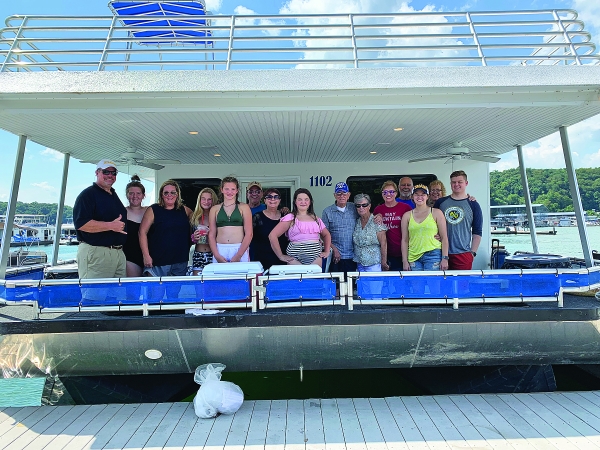 If you love being on the water and are looking for a family vacation, then you should certainly head to Lake Cumberland and check out State Dock Marina. Houseboat vacations start at down around only $1000 (sleeping up to 12 people, too) but there’s a large range of options to make your vacation exactly what you’d like it to be. Visit www.statedock.com to make a reservation today!