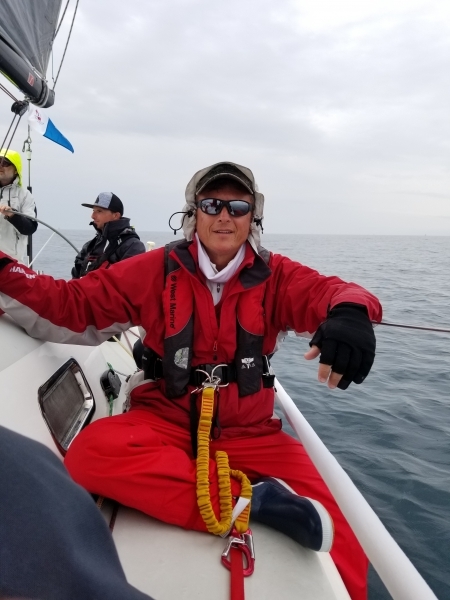 On July 15th, 2019, I sailed across the finish line just off Mackinac Island. 51 hours earlier, I started off the skyline in Chicago, for the 111th running of “The Chicago to Mackinac” sailboat race. With 266 boats entered and approximately 2200 sailors, I was excited to be starting a long-time bucket list item.

As I reflect upon this recent adventure, it occurred to me that I may be the first person to have canoed across Lake Michigan AND sailed the entire length. As an ultra-marathon canoe racer since the mid 80’s, I hold two world records for canoeing the Mississippi and Wisconsin Rivers in the fastest time. One of my goals was to also race a canoe across Lake Michigan, and in 2010 I did just that in 11 hours and 21 minutes, setting a new world record. To accomplish that feat, I had waited two years for perfect weather conditions.

Ironically, we would have the same flat, windless seas on the second day of the Mac Race. For 10 hours, we maintained a constant speed of 1.7 mph, almost half the speed when I had paddled across. Historically, the Chicago to Mackinac Race has the reputation of being very dangerous. In fact, in his sailboat racing years, Ted Turner was asked to try the race, but he snickered and called Lake Michigan a mill pond. Then, in 1970, he sailed “The Mac” and retracted his statement after sailing through 65 mph winds. He never entered the race again.

The vessel I crewed on was a 40 ft. Farr 395 named ‘Mosquito’ whose home is the Milwaukee Yacht Club. While it offers some comforts such as a small stove, it is more racer than cruiser. With a crew of nine, the boat can feel quite small after only a few hours. My job on the race was Mast/Squirrel; when sails needed to be raised, I provided the muscle power. As “squirrel,” I went below to the nose of the boat when the huge downwind spinnaker sail needed to come down. I pulled the sail through the small hatch above my head into the boat, and then properly stored the sail in its sail bag for later use. 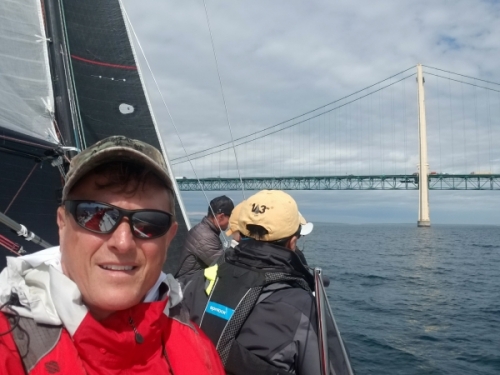 On the second night, we could see lightning approaching from the west and knew it was going to get rough. At 2am, our Skipper announced “All hands on deck!” For the next six hours, the winds would go from blowing hard to almost calm and then back again to blowing hard. This meant the sails changed as often as the wind did. Then, the steady, cold rain commenced. Most of the crew wore their cold weather gear, sitting on the rail for the next three hours. By the time the low clouds lifted, we could see the 552-foot high Mackinac bridge towers. Just before we reached the bridge, the seasoned Mac racers joked that winds always die down at the bridge, and they did. The finish line was three miles away, but we had slowed to three mph. It would take an agonizing 60 more minutes to cross the finish line.

A small cannon blast from the beach signaled the end of our race. We took the sails down and motored to our resting place near the ferry boats that service the island during summer. I was exhausted but I was also already looking forward to my next challenge, whatever that may be.

To read more about my adventures, please visit my website at TheVelvetRut.com.