It was the early 2000s B.C. (Before Children) and Captain Tom and I were finishing up the last semester at school and getting ready for another exciting summer in the 1000 Islands. Back then, it was a lot easier to hit the road with only a tent and a cooler filled with Gatorade and Hoffman hotdogs... such a simpler time. We would bop from campground to campground, and got out on the river any chance we could get. This type of behavior is known to the locals as being a “River Rat.” A River Rat lives and breathes boating, swimming, and exploring uncharted islands on the St. Lawrence River.

One summer sticks out to me the most, it was the summer of 2000-something and an old country club on Wellesley Island was under new management. It was ALL the buzz that summer; we had to be part of it!  With our charming personalities and young, good looks, Captain Tom and I landed seasonal positions as bartenders at this sought after country club – Joey’s T.I. Club.

At the bar, the weekends were filled with good food, good drinks, and plenty of laughter. One night, a group of fellow River Rats came into the club for an all-out feast. They dined on calamari steak appetizers, seared ahi tuna, family style chicken riggies, and a few bottles of Pinot Grigio to seal the deal! 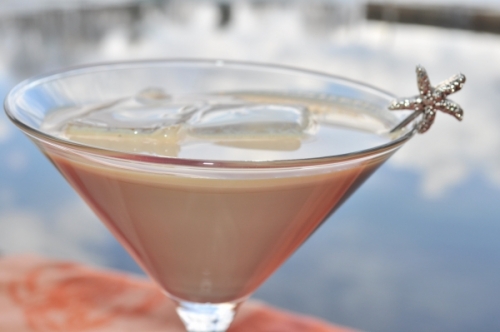 After a feast like that, the only way dessert would make its way to the table is if it were in liquid form, which led to the creation of  the all so popular T.I. Mocha-Tini! It is a smooth and creamy after-dinner drink that satisfies your sweet tooth while warming your insides. The T.I. Mocha-Tini became the dessert drink of choice that summer and into the fall months, and became a family favorite for us well after the club closed for the season. I think you will find that this issue’s drink recipe is just as enjoyable sitting by a warm fire in the chilly winter, as it would be after a hot day in the summer sun.

Stock your galley with:

Instructions:
Fill a shaker with crushed ice. Add the coffee liqueur, creme de coco, vanilla vodka, and milk. Shake and serve “up” in a martini glass. Easy and perfect for any time of year!

Nicole Hartshorn – The River Gal – has been featured in “Thousand Island Life Magazine” and “Sea Ray Living”. Nicole is also the author of “River Entertaining: Food and Drink Ideas for Boaters in the Thousand Islands”, published by Friesen Press.