Outside In - Inside Out 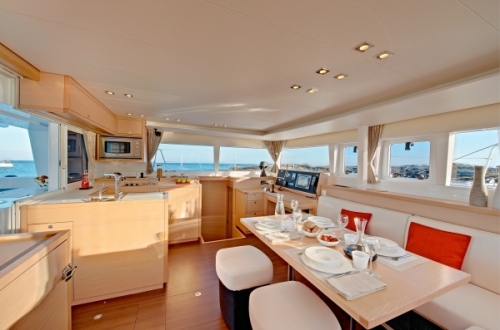 There was a time when most sailboats were created from the outside in. This meant that naval architects would carefully draw up designs based on how a boat would react to the water and looked at from the dock. They would then stuff whatever they could fit inside for living accommodations. Narrow hulls, sweeping overhangs, and low gracefully-shear lines ruled the day, producing some of the most beautiful boats ever created, but also some of the most uncomfortable.

Aesthetically pleasing as they were, the problem with these boats was the interior. Dark, cramped living spaces resembled a cave more than a living room. This was acceptable at the time because sailing was mostly a “man’s” sport and sailors were expected to be a bit uncomfortable for the sake of the adventure. To me, this was the golden age of sailboat design, but if manufacturers wanted to sell more boats, they needed to expand their market beyond the grizzled sailor who didn’t mind sleeping on a wet spinnaker.

With that in mind, a more inside out design philosophy emerged sometime around the late 80s. Manufacturers realized they needed to offer greater comfort to appeal to the whole family, so they started building new models with ever-increasing interior volumes and features. Galleys, salons, and berths all become larger, while swim platforms and multiple heads became standard. Sound systems became as important as navigation equipment, and refrigerators replaced ice boxes. This was the beginning of the current era of boat design. 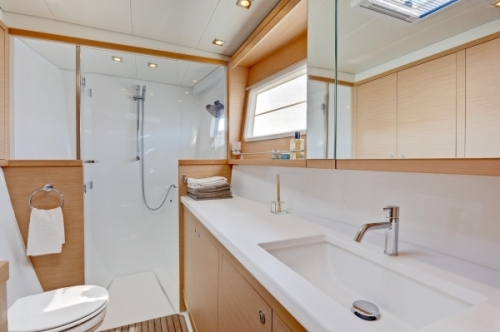 Today’s boats offer almost all the comforts of home, and nowhere is that more evident than in the interior of a modern cruising catamaran. Standard 40 to 50-foot cats now offer the same type of luxuries once reserved only for the mega-yacht set. Enhanced by wide beams, these floating felines now epitomize comfort afloat.

The first thing you notice onboard one of these larger cats is the sheer size of the main living area. Raised up above the two hulls and surrounded by widows, the main salons are exceptionally bright, spacious, and welcoming. They usually feature huge dining/sitting areas, a large nav. station, and what I call a “one-and-a-half person” galley. A large living area by itself, the usable main salon space is almost doubled when you open the sliding glass doors to the cockpit. As lines blur between inside and out, you can effortlessly step between the two areas. Normally, this additional outside space features another large table and sitting area, as well as a second sink and refrigerator. No need to get up and go inside for a beer, just reach over and pull one out of the cockpit fridge. No worries if that’s empty, because the pass-through galley opening will help keep half of your person out, if someone happens to be cooking inside.

These galleys have also been significantly updated. Three-sided peninsula style countertops incorporate three burning stovetops, ovens, and large double sinks. Separate freezers and refrigerators are the rule, and toasters and coffee makers are also available due to powerful inverters. No worries if it gets hot in the kitchen either. Just turn on the generator and crank up the air. 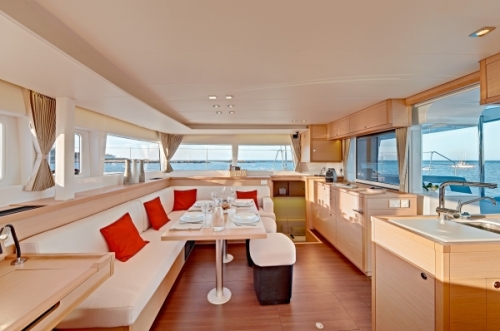 Yes, almost all the new cats now feature separate generators so you can enjoy all the same electrical comforts of shore-power while anchored in a remote harbor, and this includes A/C. A decadent luxury once thought impossible, these cats now feature zone-style A/C with separate controls in each berth so you can sleep in total comfort. And, speaking of comfort, when nature calls, there is no problem answering because most cats offer private heads to match each berth with push-button flushing systems. This is not your father’s O’Day!

Having recently returned from a TMM charter aboard a Lagoon 450 cat in the BVIs, I couldn’t believe how popular they have become. Once a rarely sighted beast in these islands, cats now rule the jungle. In my completely unscientific observation, I’d estimate 80% of the charter fleet now floats on two hulls. As an early advocate of the cruising cat, I was not surprised by their popularity, but more so by how fast they have completely overtaken their monohull brethren. I guess the world has truly turned inside out after all.