I grew up in “Boat Town USA”—Harrison Township, Michigan. In my teens, my classmates manned the fuel docks my dad used to gas up our boat. For many of the kids I grew up with, the first job they had was in the marine industry in the boatyard or as dock hands, marine store clerks, seawall builders, or as canvas and sail makers. A few captained yachts right out of high school. 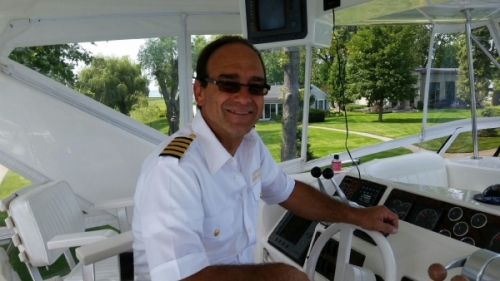 Many of these Boat Town kids, now in their fifties, found a career in the marine industry. Today, they’re looking to transfer their knowledge to the next generation. According to industry experts, the need for young people to join the Great Lakes marine workforce is becoming critical.

To start, he says, industry managers can seek out candidates who love the water. “We sell the culture that we create here,” he says, “the fact that we’re in an environment that’s just spectacular.”

Not Just a Summer Job

A marine career path can launch from seasonal employment as a dockhand or fuel attendant as a teen into a role in marina management, launch operations, or boatyard supervision. A young person working in a marina might discover technical aptitude for servicing boats or service writing. He or she might set out to become a harbormaster, sales person, or captain. 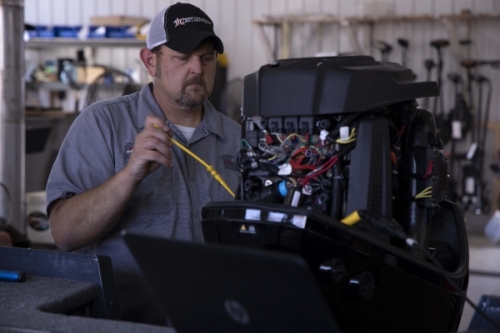 “We want to get kids to understand that this isn’t just a summer job. It’s a career,” stresses Pete Beauregard, owner of Michigan’s Colony Marine dealers.

“A lot of times, we, as marina operators and industry operators, get really hung up on the fact that we’re really short in terms of service technicians,” says Michelle Shrider, General Manager of Wisconsin’s Washburn Marina on Lake Superior, “which is really true, and we try to figure out how to solve that problem and how to solve that problem exclusively. However, there’s a cadre of different jobs that are available in this industry that can draw people in—[people] that are younger.”

With the exception of the dock hands, Shrider keeps her marina personnel employed year-round. Among young people showing interest in these non-seasonal jobs, she hires those with some experience in marina operations, especially if they come with certifications.

For Sunnyside Marina, most of Chapman’s employees are off from late December through January. “If we layoff longer than six weeks, we take a real risk of our employees not returning,” he explains. “There’s a little bit of us subsidizing the employees because we don’t want to lose them, because it’s so important to have them here for launch and haul-out and everything else that we do.”

Across the country, marina managers are facing a service technician shortage. Chapman cites this as his “biggest challenge”—competing for qualified technicians who may otherwise choose employment in the automotive or aviation industries. 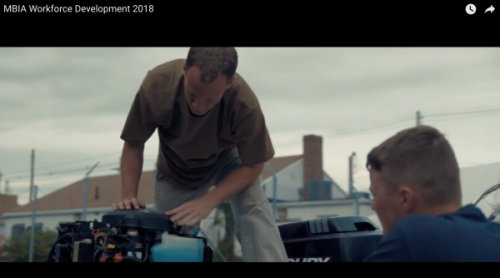 “It’s a customer service issue,” says Michigan Boating Industries Association (MBIA) Executive Director Nicki Polan. “If you can’t get your boat back in a timely manner, you’re going to be discouraged with boating.”

Becoming a reliable marine service technician requires years of experience, well beyond initial certification. Detecting the faint growl of a bearing about to go bad, fluctuations indicating a fuel pump on the verge of failing, or the source of unusual buildup in the 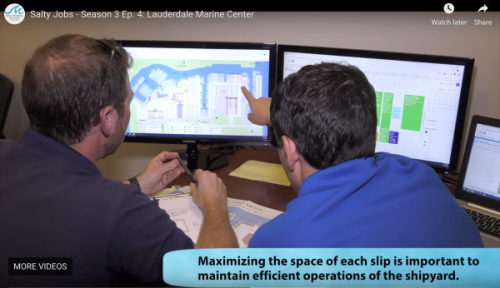 bilge requires an acumen that evolves over time.

“It’s not just a matter of plug and play. A lot of it you diagnose with experience,” says seasoned marine technician Jim Gravenmier.

Fanti recently hired Doug Romero, a ship’s captain who has helmed private charter yachts up to 150 feet. Romero will apply and share his captaining knowledge while also being mentored by Fanti’s veteran technicians.

“Any holes in my experience, they’re showing me. It’s kind of an in-house training,” says Romero, who grew up in London, England, sailing the River Thames before captaining yachts in the Mediterranean and Caribbean. 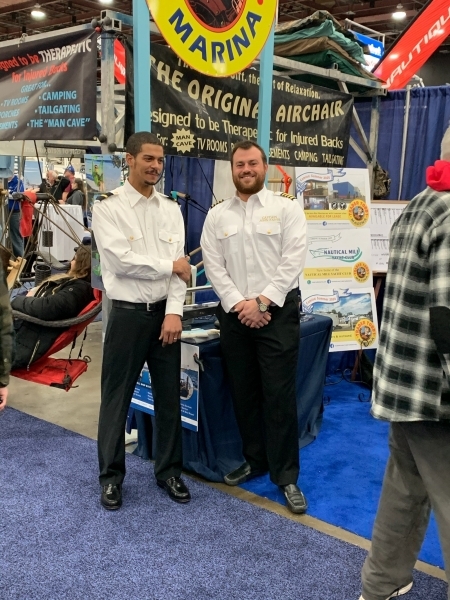 “I just naturally love working on boats,” says Mulligan, who’s willing to “do whatever it takes to get the job done,” including long boat deliveries.

“A lot of the people that we hire come from a trade school,” says Fanti. “They come here with a little knowledge. You got to have some knowledge.”

The scope of Fanti’s service covers “everything under the floor,” meaning the boat’s mechanical elements. Come spring, his employees also will prepare boats for launch and delivery. In the fall, they’ll be busy shoring boats for the winter. Supporting all of these activities is Shannon Cummings.

“Shannon does everything,” says Fanti, explaining that she runs the office, procures and transports parts, and schedules jobs.

During the off-season, she continues scheduling repair and overhaul jobs and organizes the office and storage areas, ensuring that the business is ready for the flood of work that will pour in late winter and early spring.

Fanti says he looks for candidates to hire that come with technical skills and a passion for the industry. “When these guys go out to their jobs,” he says, “our instruction to them is that you look over that boat and treat that boat like it’s your own boat. If you see something that you’d fix on your own boat, well then, you fix it on the customer’s boat. So, that kind of integrity is what we look for.”

Gravenmier tells industry newcomers, “It never rains in a marina, and don’t quit. It doesn’t stop; so if you don’t want it long-term, don’t even start.”

To attract young workers, marina managers are visiting secondary schools and connecting with trade schools. They’re also seeking long-term career potential in the industry among their seasonal staff. Three years ago, the MBIA launched a Detroit Boat Show “Career Day,” which fell on President’s Day in 2018 and 2019. In 2020, the MBIA ran a five-day career day campaign during the nine-day show. With a valid student ID, young people were admitted free and encouraged to stop at the career-days exhibits, which earned them entry to win a $250 Visa gift card. With 200 students participating, the MBIA considered the campaign a success.

“We had one group—the Bay-Arenac ISD Career Center [in Bay City, Michigan]—they brought 60 kids by bus and those kids toured a manufacturer before coming to us,” Polan says, “so they really connected all the dots between manufacturing, retail, and the end-user experience for the boat buyer.”

In February, the MBIA announced a partnership with the Macomb County Chamber of Commerce in launching three programs benefiting the marine industry:

“Now we can go out and talk in high schools and get kids that want to look at the potential of getting into the marina industry as a career,” says Beauregard. “Dealerships will be able to team up with high schools in their vicinity and get kids into summer jobs, which will give them a taste of this industry. That’ll take them to the next step, which is getting the certification from a college. Ultimately, the goal is for them to get a two-year degree.”

Phil Purcell, CEO and President of the Marine Industries Association of South Florida (MIASF) has tackled the issue of filling vacancies in Florida’s enormous marine industry by reaching out to young people in their medium of choice—video. Three years ago, the MIASF launched Salty Jobs™—a series of four- to five-minute videos, each highlighting a marine career path. Assisting the MIASF in replenishing marina staff is Atlantic Technical College, near Ft. Lauderdale, which hosts a yacht technician associates-degree and apprenticeship program. Purcell says the MIASF is ready to share resources and experience in career promotion with marine organizations in the Great Lakes as they solicit candidates to fill their unsalty job vacancies.

“In terms of training for positions like fuel dock or working on the dock and around the boats,” says Shrider, “one of the things I have found to be really effective is I go to the tech school here locally, which is Wisconsin Indianhead Technical College… I talk to the folks that are close to graduating or have another semester after the summer and I hire them to do the jobs that entail working in the ship’s store, working on the fuel dock, and working on the boat ramp, and in the other areas of the marina, so that they can kind of get their feet wet and see what’s involved with working at a marina and see if they actually like it.”

Chapman stresses to candidates that the essence of running a marina well is simple hospitality—taking care of customers. “The first thing we hire for is integrity,” he says. “We can train everything else. You can’t train integrity.”

Melissa Walsh was raised on the shores of the heart-shaped lake nestled between the St. Clair and Detroit rivers that pumps the lifeblood of water recreation and the “blue economy” in Southeast Michigan. She’s enjoyed learning to navigate the shallow depths and sail the shifty winds of Lake St. Clair. So naturally, as a freelance journalist, Walsh delights in writing about power boating and sailing.