A look at why an
innovative diesel outboard
is taking the global marine market by storm.

“Cox Powertrain’s CXO300 diesel outboard is one of the hottest products on the market right now,” says Chuck Gould, Vice President of Sales for Diesel Outboard Solutions, a Virginia-based distributor for this ground-breaking diesel outboard. “It’s the realization of a long-held desire in the marine market for a purpose-built, high-powered diesel outboard. It’s been eleven years in the making, with nearly $100m of investment, making it the most highly anticipated product I’ve seen for many years.” 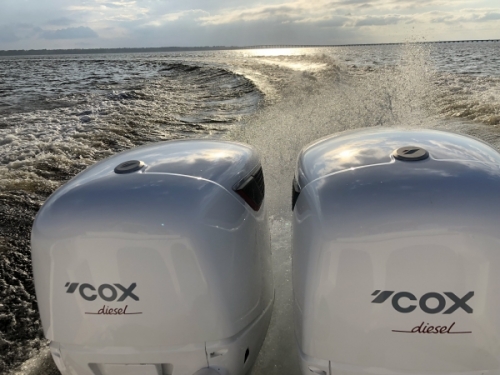 What is it about this outboard that has so many people excited?
In terms of safety, diesel engines are undoubtedly less flammable than their gasoline counterparts. But, until now, no one has succeeded in creating a high-powered, commercially rated diesel outboard that was light and compact enough to compete with existing gasoline models. Cox has now created an outboard which is highly competitive against established gasoline competitors and will shake up the marine engine market. 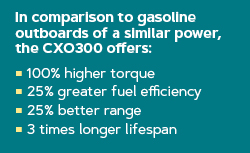 Cox Powertrain has assembled a team of highly skilled engineers who bring experience from companies such as Cosworth, Jaguar Land Rover, and Ricardo. More than fifty in-house engineers at Cox Powertrain’s UK headquarters have spent the last decade developing and refining this turbo-charged, 4-stroke V8 engine to ensure top-quality performance combined with rugged reliability. It is the only diesel outboard purpose-built from the ground up. The idea for its development came from Formula 1 technology, with many of Cox’s engineers joining the firm from the premium automotive industry.

It’s All About the Torque 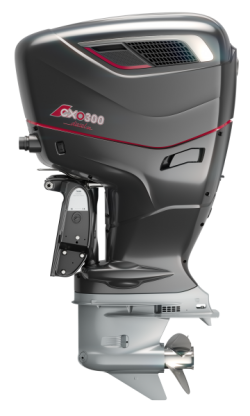 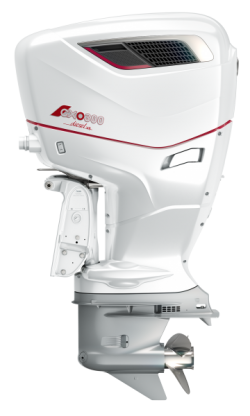 The CXO300 produces 100% higher peak torque at the crankshaft than its 300 hp gasoline competitors, and 60% higher when compared to a leading gasoline 350 hp competitor. This enables a boat to move weight more efficiently and reach peak torque and top power more quickly. Furthermore, the improved performance can be seen throughout the rpm range, reaching peak torque at 1600 rpm and sustaining this amount of torque to 3600 rpm.

The CXO300’s greater low-end torque means less strain is put on the engine, with less fuel consumed, when pushing heavy loads through the water. Larger vessels with multiple installations also benefit from the higher torque curves, at both low and high end rpm’s.

Positioned as a premium product, the increased range, higher fuel efficiency, and fewer service intervals of the CXO300 highlight the impressive cost savings over its lifespan. Not surprisingly, these cost efficiencies have brought the CXO300 to the attention of commercial users, as well as coast guards and militaries, many of whom are also eager to make the switch to diesel.

Significant numbers of leisure users and sport fishers are also attracted to the CXO300’s durability and fuel efficiency. Cox Powertrain’s Global Sales Director, Joel Reid, comments: “Recreational users appreciate that they can also benefit from the high torque and extended range they get from the CXO300, and it’s designed to live two or three times longer than current gasoline outboards.” 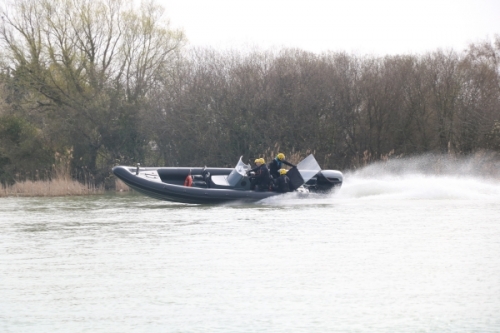 As the majority of CXO300s are being fitted in multiple installations, the engine is offered with three lower leg length units – 25”, 30”, and 35”. It also has a spline spec of one and a quarter inch and nineteen teeth, making it compatible with off the shelf propellers. Users do not have to worry about purchasing standard or counter-rotating gear boxes, as all are made the same. On the display at installation, you simply tell the engine which direction you want it to spin.

The CXO300 is available with DPS, GPS, and cruise control, and can be configured with an Optimus Electronic Power Steering System, Murphy PowerView® displays and CoastKey wireless kill cords and keyless ignition.

Cox Powertrain offers a recreational warranty of five years, as well as a new level of service where customers can raise a claim at the push of a button and have the engine repaired and running again in no time. The after-sales team also has real time visibility of every case to ensure consistent service standard compliance by the dealer network.

Find out more at www.dieseloutboardsolutions.com today.