Fill The Lakes With Recovered Polluters

Sailing teaches you a lot of lessons. From the physics of making the boat go, to the geometry of navigation, it is an activity that offers plenty of educational opportunity. One of the most important of these lessons is the healthy respect for the environment that most sailors take away from their time on the water.

The most obvious of these lessons is that of fossil fuel consumption. Sure, most sailboats utilize an auxiliary motor, but those are extremely fuel efficient when compared to most power vessels. Admittedly, the simple knowledge that their boats do not pollute as much as their horsepower-driven counterparts lead most sailors to adapt a sort of Prius-based environmental snobbery that is often hard to take. As well-meaning and obnoxious as this attitude is, this is not the healthy respect for the environment I cherish. 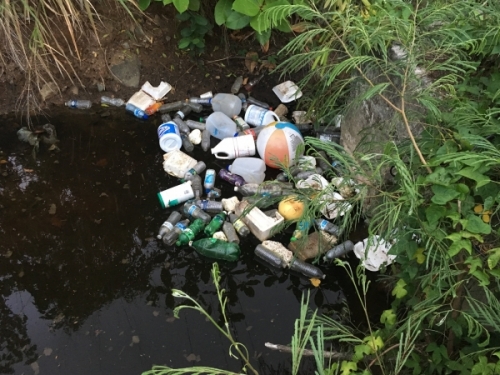 The real respect lies in a sailor’s ability to witness human effects on our coastlines and water first hand. The first time I realized how bad the plastic problem is was during a visit to an offshore atoll during a sailing trip to Belize about 20 years ago. As the only boat anchored inside that remote reef, we felt as if we were the only people in the world that day. But when we went ashore, we were astonished by the sea of plastic washed up on the unattended beach on the ocean side of the island. We found everything from plastic bottles to kid’s toys, and even a telltale Carnival Cruise line spoon that really struck home. The plastic pieces literally outnumbered the natural items that had drifted ashore. It was a real wake up call for us all.

Closer to home, the plastic in the Great Lakes is certainly a problem as well. The beaches may not be as covered in our human decadence, but any stroll along the shore will certainly be met with plenty of manmade items. I am as guilty as everyone else. Back in the 80s, it was our tradition to tear our cans in half and just toss them into the lake while racing so they would sink to the bottom. Out of sight, out of mind, I guess. Bolstered by experiences like the beach in Belize, I have long been a recovered polluter. Now just the idea of accidentally losing any piece of garbage overboard is cringe-worthy.

Plastics may be the most obvious environmental concern, but they are far from the only one. In the thirty-plus years I’ve been sailing the lakes, I’ve seen the rise and fall of several natural invaders. I first remember the Sea Lamprey invasion of the early 80s. That was quickly offset by the zebra mussels, which were in turn displaced by the quagga mussels. Each of the invasive species were introduced into the Great Lakes ecosystem by the ballast water of ocean-going freighters. An unintended consequence of human activity, these species quickly flourished in our unique freshwater lakes. The fact that all ballast water must now be exchanged before entering our lakes does give hope that we can control our own environmental transgressions over time.

Sailing also seems to offer an appreciation for the increasing effects of weather extremes. Just look at the results of our current record high water levels. Breakwaters are disappearing, docks are underwater, and lakeshore properties are now trying to figure out a way to hold the water back. Granted, lake level fluctuations are cyclical, but it was just a few years ago that we were facing record low water levels that caused opposite, yet similar, waterfront problems. To me, watching these back-to-back record events is certainly a warning sign of a changing climate.

I realize that there are some people out there that don’t agree with the whole climate change theory, but what are they really defending? Their ability to pollute? That seems crazy to me. For the good of future generations, we should all do our part to help minimize our impact on the environment. After all, any boater that has ever been far offshore knows the feeling of just being a pawn in the game of the world. Hopefully, we all also realize that this game only ends with a checkmate against us if we don’t contain our effect on the environment.