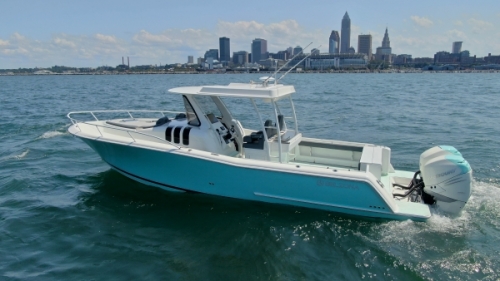 At the Fort Lauderdale International boat show in 2013, I met a young boat building company out of Miami called Belzona Boats. I was shocked that a boat builder would have started to manufacture a whole new concept of boat so shortly after the recession, but, when I looked at the models in the water, I was floored by their innovation and stunning beauty. The design and character really caught my attention and interest. No wonder they forged ahead in uncertain times; the boat might just sell itself. 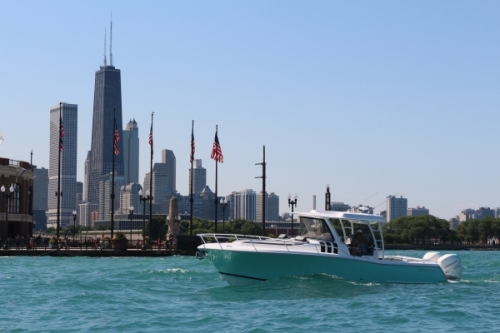 Now, me, being a publisher for the Great Lakes boaters, of course I asked them if they wanted to showcase these beauties up in the Great Lakes, and them, being a boat builder with a desire to see everyone aboard a Belzona, they said sure.

So, for a couple years, you may have seen some ads and articles about these boats in Great Lakes Scuttlebutt, but probably not much more than that. Belzona had quickly landed a huge market in South Florida and then worked their way up the East Coast but, as with most other marine innovations, it took a little while to get into the Great Lakes. 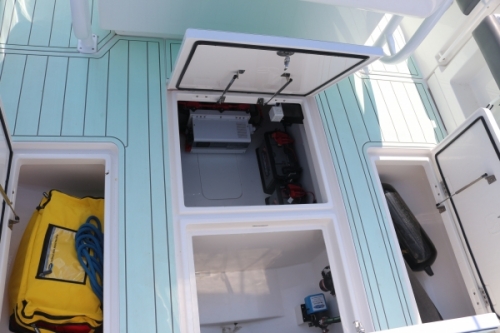 Finally though, in spring this year, I got a call from Belzona: “We’re ready!” Knowing they now offered a 27ft, 32ft, and a new 40ft model, I was very excited and asked them to come splash some models in our waters. The first boat they had available for this kind of thing was the 32’ WA, which happened to be my favorite boat.

I had no idea what to expect since I had never driven a Belzona before. They may look stunning, but how would the boat perform? Keeping my expectations in check (just in case) I met the Belzona 32WA at our home port in Ohio – Catawba 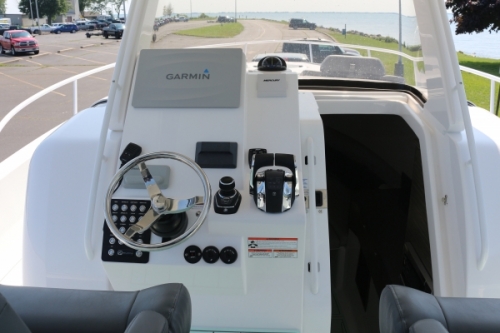 Island – and we promptly took the boat to Put-In-Bay. I mean, I’m fairly certain it’s the law for any new boat splashing on Lake Erie, right?

The drive over was in 15 knot NE winds, which threw up about 3-foot seas, but the twin 350 Mercury Verados (optional, 300s come standard) kept us cutting through like butter, which kept the fuel burn down and the cruising speed comfortable. I no longer reserved my expectations.

Not only was I impressed by the performance, but I really enjoyed the layout. With three guys on the boat, there was more than plenty of room to accommodate us either at the helm or in other seating. The walkway around the boat was wide and deep enough to make traversing the edges a non-thought. Access to fishing, tanning on the sun pad, getting fore and aft, or to one of the sliding doors built into the gunwale – offering an opening large enough for a wheelchair – was done with confidence. 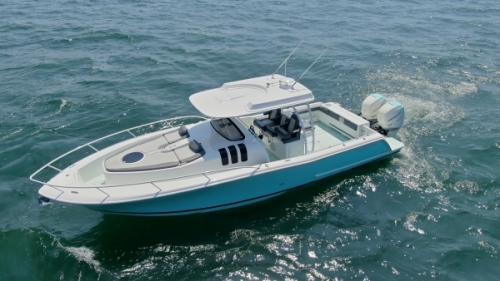 Plus, below decks, there was an entire cabin that could fit a guy my size and I’m 6’4” and 300 lbs, so that says something on its own. The bed was huge; even the head was big enough for me. There was a TV and seating area, a small galley with a microwave, and the electrical panel was conveniently placed for access from the helm.

Speaking of the helm, the 32WA had everything I could’ve wanted to try. The hydraulic steering was complimented by the optional joystick control, complete with Skyhook technology. The large 16in. screen on the Garmin GPSMAP7616 made navigation a breeze and there was easy access to all the lights – and, boy, did this boat have lights. At the helm and all the way around the gunwale and decks – there were even underwater lights off the transom. She was gorgeous at night! 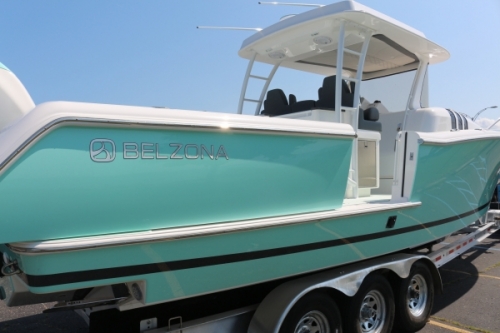 Fortunately, we got to spend a few more days running this boat all around the Great Lakes. We stopped in Cleveland, then Sandusky to show off a bit at Cedar Point. Another day found us on Lake St. Clair out of Harrison Township, then downtown Detroit to enjoy the iconic skyline. Next, the boat went on a trailer and over to the west coast of Lake Michigan. Chicago, as shown from a Belzona... what an unforgettable adventure. If you were there, you might’ve seen the 32WA making its way up the river, in front of the Chicago skyline at Navy Pier, or cruising by the Shedd Aquarium and just hanging out 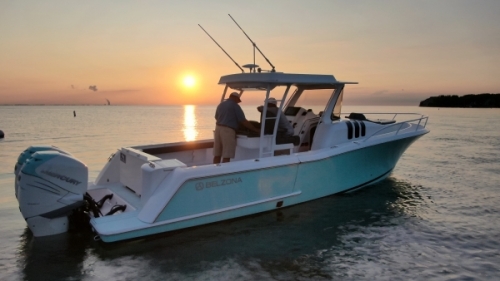 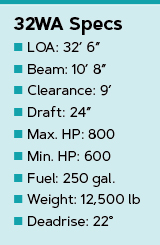 We took a massive amount of photos, video, and drone footage. It’s not often that Great Lakes Scuttlebutt gets to share in such an awesome experience like this - introducing a new boat line to the Great Lakes. I’m thrilled that the line has made its way here, and has proven its worth in front of some of the most notable locations on the lakes.

Many thanks to Belzona for letting me try out your beauty. I hope you (the reader) will check out the boat line for yourself. They’re down at the Fort Lauderdale Boat Show again this year, but more importantly, they’ll be at a Great Lakes dealership near you soon. And, should you find yourself browsing a new Belzona, make sure you name-drop Great Lakes Scuttlebutt – where you heard the scuttlebutt about their boats!

Find technical data on engine options, performance, and other models available at www.belzonaboats.com.

Check Out The NEW San Juan SJ32 and Ride Along!