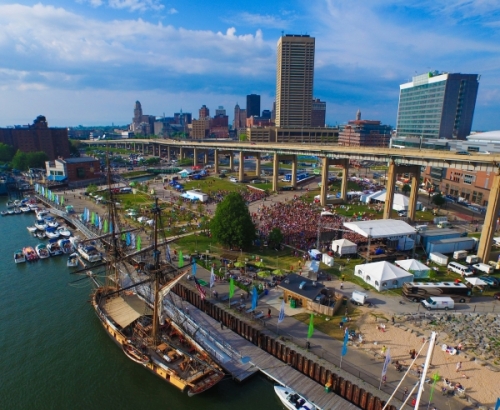 The Buffalo-Niagara Region, often referred to as the Niagara Frontier or the Greater Niagara Region of Western New York, is in the midst of a waterfront resurgence of sorts. Buffalo, a four-seasons city known more for snowing than boating (unless you live here), is in an enviable position to have Lake Erie and the Niagara River on its doorstep/dock-step. Finally, after years of talking the talk, the city is now walking the walk… and boating the boat.

Thanks to recent renovations and improvements at Safe Harbor Marina in Buffalo Harbor, this full-service facility is now the largest in the state with 1,100 slips. A new eight-lane boat ramp area allows for easy access to the water and transient slips are available, but you might want to call in advance (716-828-0027) – it’s a busy place.

You are a cast away from some of the finest walleye and smallmouth bass fishing in the world, all in the same Lake Erie waters. The word has gotten out about the excellent fishing and this marina serves as a base of operations for many bass tournaments. 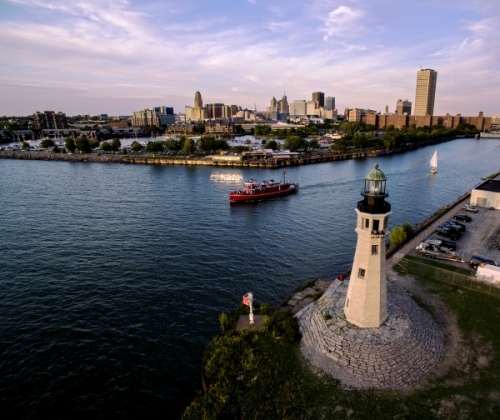 The marina is located within Buffalo Harbor State Park, the state’s newest park, which also includes a restaurant (Charlie’s Boat Yard), personal watercraft launches, a fish cleaning station, restrooms, and a beach (but no swimming). A nautical-themed playground is also on site, along with paths for birding, hiking, and biking. Because you are inside the break walls of the harbor, it can be a safe respite should the winds kick up on Lake Erie.

Across Route 5 and Fuhrmann Boulevard is Tifft Nature Preserve, a 264-acre landscape known for birding and hiking through some five miles of trails that network into marsh and forest terrain.

Route 5 heading east will take you to downtown Buffalo, less than five minutes away driving if you grab a taxi or Uber. Ohio Street can also take you downtown if you want to catch a Buffalo Bisons baseball game, the Triple A farm team of the Toronto Blue Jays, at Sahlen Field.

Another boating access point for Buffalo is through the Buffalo River. One of your first stop-over points should be Canalside, one of the keystone attractions of the area’s waterfront renaissance. Over 1,000 feet of docking space is available; transient dockage fees are required with an hourly rate for water and electric service. Special events and festivals are held throughout the year on site. It is also adjacent to the popular Naval and Military Park. 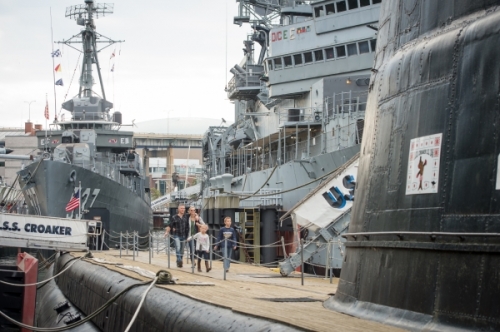 The Naval and Military Park is a museum that is home to several decommissioned U.S. Naval vessels including the USS Little Rock cruiser, the USS Sullivan destroyer, and the USS Croaker, a submarine.

A bit further up the Buffalo River is Buffalo Riverworks, another entertainment destination that’s relatively new on the Buffalo waterfront scene. With 60,000 square feet of available space, it can be a concert venue for up to 5,000 people, a festival site, a wedding or banquet setting, or just a spot to grab a bite to eat with a brew or other beverage.

These sites are not far away from Courtyard by Marriott Downtown/Canalside or Buffalo Marriott Harborcenter, the newest facilities on the Buffalo tourism map. However, there are plenty of other places to stay if you prefer other accommodations. 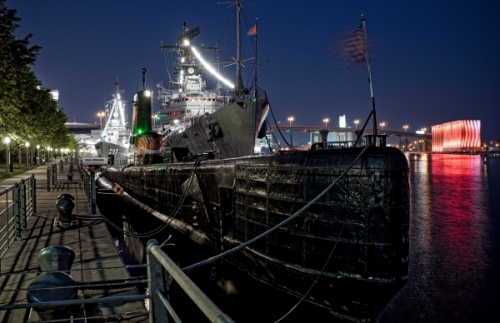 You will need some wings to go with that beer, too. Remember, this is the original home of the chicken wing. The area even has a Chicken Wing Trail so you can sample some of the best that Western New York has to offer. Many places have their own twist on the famed wing tradition. Don’t ask for ranch dressing here… its blue cheese all the way! Some even have blue cheese in the sauce.

Erie Basin Marina is another boating stopover point that has transient slips for a reasonable price. There are also motorized and non-motorized boat launches available. Fuel docks are there if you need them. If you want to grab a bite to eat, Templeton Landing Restaurant is the spot with seafood-focused American fare, a brick patio, and a fire pit for those outstanding Western New York summers. 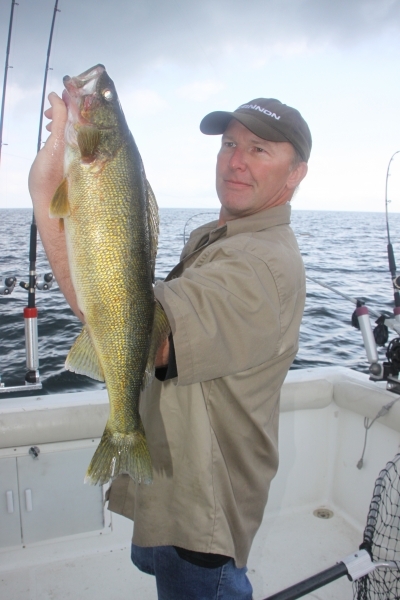 The Erie Basin Marina is near the entrance to the Black Rock Canal Channel that will give you safe access to the Upper Niagara River and beyond through the Erie Canal if you so desire. Once you travel the channel, the river opens up a bit and splits into two sections – the East River and the West River. The East River is entirely in New York. Grand Island will be on your left, a large island that is filled with potential visiting points, transient slips, eating spots and recreational enticements, all of which can be found in the Launch Issue 2018 (May/Jun) of Great Lakes Scuttlebutt, written by Ben Bidell.

As you continue down the lazy river at this point, you will encounter Isle View County Park and Niawanda Park. To break up the trip, stop at the latter and walk across the street to Old Man River for a foot-long dog and some sweet potato fries. Next to that is Mississippi Mudd’s, another local dining favorite that offers tables on the roof overlooking the picturesque river. Flip a coin on local personal preference between the two.

As you follow the shoreline, the entrance to the Erie Canal will be on your right, just before Tonawanda Island. This is Gateway Harbor and another waterfront gem to take advantage of in the Tonawandas. The Erie Canal, built in 1825, is now considered a recreational waterway that includes hiking, biking and paddling options that cross the Empire State 363 miles to Albany. At that point it hooks up with the Hudson River and, if you so desire, you can make your way out to the Atlantic Ocean. 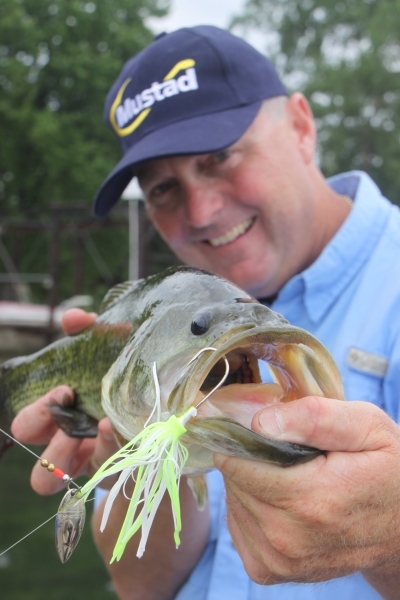 For our purposes, let’s stay with Gateway Harbor in North Tonawanda and Tonawanda, where some outstanding restaurant options exist at the Dockside Bar and Grill, as well as Remington Tavern and Seafood Exchange. Transient docking is available. It’s a nice ride out to the first lock in Lockport, a double lock set, about 20 miles to the east.

Heading back out into the upper river and continuing toward Niagara Falls, you will pass Lumberjack’s Patio and Grill, adjacent to Gratwick Waterfront Park, also in North Tonawanda. Artificial reefs have been constructed out in front of the park to help attract fish species like bass, walleye, and muskellunge. Angling action for these species is excellent here and you’ll want to make sure you bring your fishing rod and buy a license.

Just past Cayuga Island and the Little River where Griffon Park is located, Four Points by Sheraton Niagara Falls boasts 1,000 feet of river frontage. Tie up your boat and go in for a meal at Bella Vista Ristorante or have a glass of wine on the outside deck. The accommodations are perfect with easy access. If you’ve brought along a bike, you are just around the corner from LaSalle Park, the starting point for a five-mile trail along the river that extends into Niagara Falls State Park, the oldest state park in the country and home to one of the natural wonders of the world.

You don’t want to boat too much further toward Niagara Falls. There is a two-mile safety zone that is buoyed off for boaters. However, you can make a left hand turn just beyond the North Grand Island bridge and head back around Grand Island in the West River section. Most of this section of river is in Canadian waters. 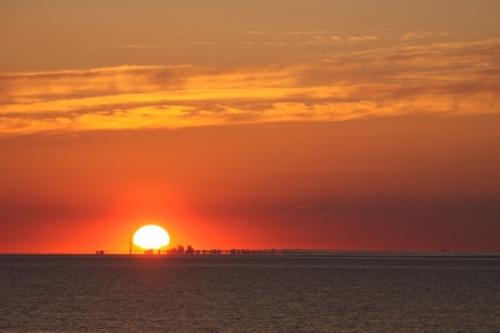 One Canadian access point is where the Welland River flows into the Niagara at Kingsbridge Park. This will take you into the little town of Chippawa. Just beyond is the Chippawa Boat Ramp Park.

Directly across from Beaver Island State Park Marina on Grand Island is the Niagara Parks Marina at Miller’s Creek in Canada. The Miller’s Creek Marina Grill offers food and there are 135 slips in the marina. There is also a bike repair station, a water filling station, and a public boat launch.

As you head back up to Lake Erie, you will see the Peace Bridge with Fort Erie, Ontario, on the right. The current is strong at this point, the bottleneck of the upper four Great Lakes being funneled into the head of the Niagara River. Stay to the right of the channel if you decide to take this route back out into the Lake, or head back out through the Black Rock Canal.