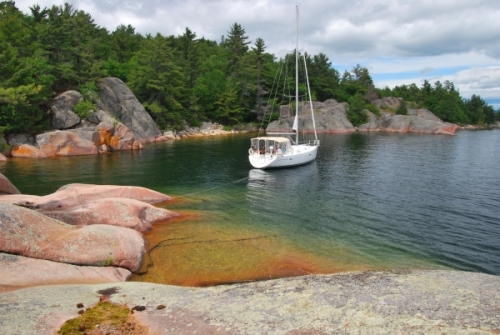 There aren’t a lot of boating destinations that offer acres of pristine, remote wilderness, but with the comforts of civilization still well within reach. That’s part of what makes Northern Ontario special, and the North Channel is a perfect example.

Known as one of the world’s best freshwater cruising grounds, the North Channel connects Georgian Bay – at the north shore of Lake Huron – to Lake Superior, and is sandwiched between Manitoulin – the world's largest freshwater island – and the mainland. The channel spans two regions of Ontario: Northeastern Ontario (only a few hours’ drive from Toronto or Ottawa) and Algoma Country (bordering Michigan). The North Channel is 160 nautical miles of big, beautiful open space that is well-suited to seasoned captains and novices alike.

One of the best-known features of the North Channel is its stunning natural beauty. There are long stretches of wilderness that are virtually untouched, the lack of development due, in part, to much of it being Indigenous-owned land. The Channel is dotted with small islands, showcasing the colourful granite and windswept pine trees characteristic of the area. The distance from urban life is such that when the northern lights appear overhead in the evening, they’re pure and untouched by light pollution. Look up any boater’s account of a North Channel trip, and you’ll find words like peaceful, magical, and breathtaking. Retired boating champion and writer Bill Jennings states it best: “Boating the North Channel is intoxicating.” 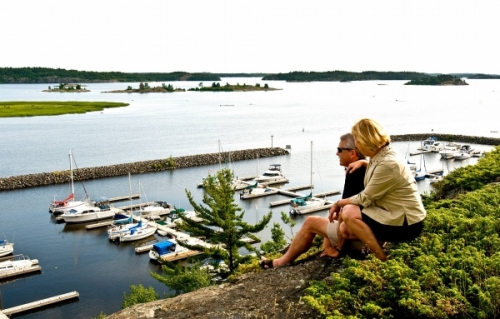 But although there’s a lot of nature to take in, the North Channel’s many towns and villages mean that you don’t always have to be roughing it out on the water – or rather, only as much as you want. Provisioning is never an issue with the area’s network of boat-friendly towns, never far from where you’re cruising.

Mid-June to mid-August is the peak season, although some experts say that mid-August to mid-September is the ideal time for cruising, with both tourists and mosquitoes having vacated the area. The North Channel is proudly part of the Great Loop, the epic boating journey around the U.S. and Canada. But for those desiring a shorter adventure, many day trip opportunities are available. 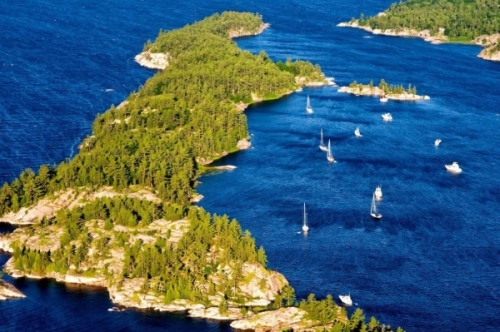 Killarney is the launching point for many boaters coming north from Georgian Bay. The village features no fewer than six marinas, along with other anchorage points. It offers repairs and maintenance, provisions, places to eat, and is adjacent to the beautiful Killarney Provincial Park with its multiple hiking and canoeing opportunities.

Little Current, known as “the gateway to Manitoulin Island,” is a port of entry to Canada, a cruise ship port, and a hotspot for boaters, with three marinas as well as the town docks. In addition to shopping and dining, the town boasts beaches, parks and playgrounds, along with walking trails offering waterfront views. Manitoulin Island is also a thriving hotbed of Indigenous culture, with many Indigenous-owned businesses and specialized tours catering to visitors. 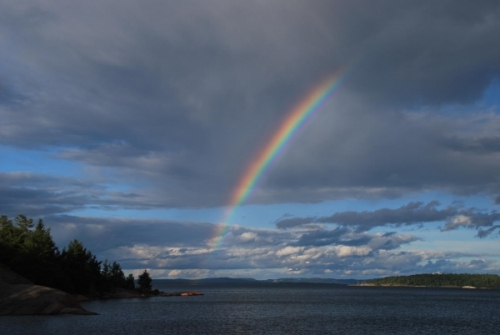 Thessalon, on the north shore of Lake Huron, has a full-service marina where visitors can refresh with a shower, kitchen, laundry, and other amenities. They’ll even loan a bicycle to anyone who wants to explore the surrounding area, with its lovely waterfalls and scenic views. The Thessalon River runs right through town, and the beachfront sunsets are spectacular.

Blind River has fishing opportunities aplenty and beautiful beaches for swimming. On land, you’ll find a hub for local touring routes, hiking trails, the nearby Mississaugi First Nation, festivals and events throughout the summer, and lots of opportunities to eat including restaurants, food trucks, and a farmers’ market. It’s also connected to the Great Lakes Waterfront Trail, a major cycling route. 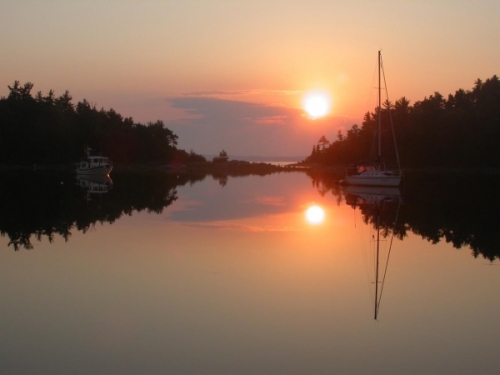 Hilton Beach – on St. Joseph Island, not far from the city of Sault Ste. Marie – is a longtime popular tourist spot with a full-service marina and many amenities nearby. The village features events throughout the summer including music performances, an art festival, and a car show.

Sault Ste. Marie is the major urban centre of the Algoma region. It borders the sister city of Sault Ste. Marie, Michigan, and features three major marinas, along with a historic canal and the St. Marys River. In addition to summer festivals and events, the town – affectionately known as “The Soo” – is also a gateway to Algoma’s beautiful wilderness, with countless opportunities for hiking, fishing, and other outdoor adventures.

In addition to these and other smaller ports, the North Channel features a number of sheltered anchorages, harbours, and bays where you can moor for a casual picnic on the rocks, swim on the beach, or hike in the woods. 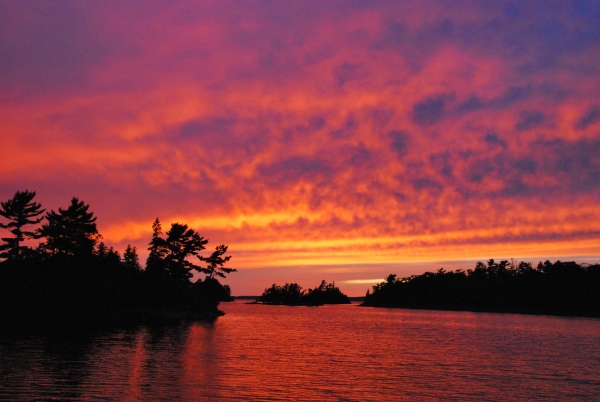 Boaters should be sure to consult resources such as the Canadian Hydrographic Service; just like any other big water area, the North Channel requires preparation and a certain level of expertise, depending on the ambitions of your trip plans.

Visit thenorthchannel.ca for maps, travel tips, and other helpful information for boaters. Lots more info about the region can be found on NorthernOntario.travel.