A Free Sailing Vacation to Tahiti!

The U.S. Winner of the 3rd Annual "Trip of a Lifetime Giveaway" is:

"After we hung up, I was torn between disbelief and excitement," explained Amy of the February 10 phone call wherein she was informed she was the U.S. winner of the 3rd Annual "Trip of a Lifetime Giveaway." 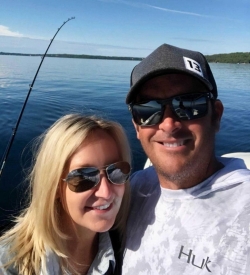 Including airfare, five days and nights aboard a Sunsail sailing catamaran, two nights in an over-water villa, and food along the way, the 2020 trip is valued around $14,000! Amy and her guest—her husband, Ray—will board a plane to Los Angeles in early May 2020 (because of the COVID-19 pandemic, this prize will now take place in March 2022), and quickly transfer to an eight-hour flight that will deliver them to Pape'ete, Tahiti, where the catamaran awaits.

Amy continued, "I called Ray and said 'You're never going to believe it, because I can't believe it, but I won the drawing for the trip to Tahiti with Scuttlebutt magazine—from the [Detroit] boat show!' He asked if I was sure it wasn't a prank." After repeating the extensive details regarding the trip, it finally began to sink in for both of them. "I was actually at the airport getting on a flight for work at the time, and I think Ray might've started packing as soon as we hung up, too!" 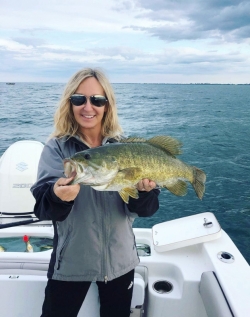 Avid boaters of Lake St. Clair in their free time, Amy and Ray have hosted a number of PWC races around the Great Lakes. "I raced professionally for 20 years and won some World Championships along the way," Amy explained. "That's also when I met Ray. But before all that, I spent a lot of time on Saginaw Bay with my parents, boating in the summer and ice fishing in the winter."

Amy's description of her history in PWC racing is remarkably humble. In 2016, she was recognized with a Legacy 'Wake of Fame' Award acknowledging her "commitment to PWC-boating safety education across a large regional area" and helping to "significantly reduce injuries or accidents and increase operational capabilities." She has raced in several countries including Thailand, Monaco, Malaysia, and Russia and earned herself five world titles, 15 national titles, and a slalom world record.

These days, Amy continues to advocate in the world of PWC racing and has a whole new adventure ahead of her. When asked what she is looking forward to the most about the vacation to Tahiti, Amy said, "We've chartered around the BVI before but have never been to Tahiti. It's been something we've always wanted to do so we're really looking forward to spending a week on clear blue water, exploring new places and meeting new people."

The Canadian Winner of the 3rd Annual "Trip of a Lifetime Giveaway" is:

Patty Bryant of Vancouver, BC

At the Vancouver International Boat Show, a large banner and display encouraged attendees to stop by the booth and sign up to win a sailing vacation to Tahiti. As many others walked by, perhaps assuming their chances were not worthy of their time, Patty's friend was more optimistic and encouraged Patty to also enter to win.

"I entered, all the while never thinking that I would ever actually win," said Patty, the Canadian winner of the 3rd Annual "Trip of a Lifetime Giveaway." 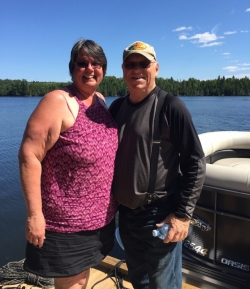 Her disbelief makes sense as the 2020 trip is valued around $14,000! Patty and her guest—her husband, Rob—will experience paid airfare, five days and nights aboard a Sunsail sailing catamaran, two nights in an over-water villa, and food along the way.

Learning of her win via a voicemail message and an email, Patty recounted, "I couldn't believe it. At first, I thought it was going to be a sales call. You know, 'you entered and for a very special price you can...' but then, when I read the email, my heart started racing. Is this real? It seemed so!"

Growing up fishing the many lakes of British Columbia with her parents (both avid fishermen), Patty spent plenty of time in the Okanagan Lake area of BC. Rob grew up fishing too, although he did so in Australia’s Lake Macquarie. Their mutual love of the water has kept them boating, fishing, and exploring into adulthood, even taking them out for fishing and snowmobile racing on the ice.

When asked who she got to share her win with, Patty said, "The next day at work, I had to ask for the time off 'because I won a trip to Tahiti.' My supervisor immediately approved my time and my co-workers are super excited for us." With a laugh, she added, "Excited, as well as just a little bit jealous."

Unfortunately, the past few years have been challenging for Patty and Rob, made more so recently having just finished moving both their house and Rob's restoration shop, including several cars, trucks, and snowmobiles in various states of repair. "A chance to put it all behind us while we revel in the beauty of Tahiti will be amazing," said Patty.

Make sure you follow Great Lakes Scuttlebutt on Facebook, Instagram, or Twitter for more about the trip in the coming months. You can also subscribe to the print or online magazine, or to our weekly newsletter to stay up to date on this and ALL the news about boating on the Great Lakes.

Details of the trip: 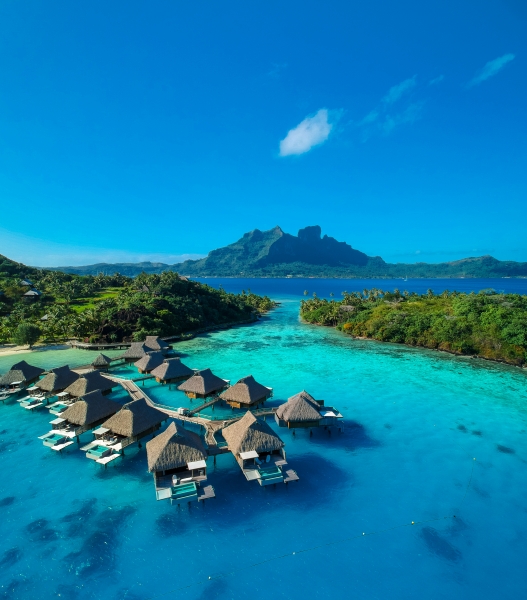 Begin your journey to the remote and extremely alluring French Polynesian islands aboard the award winning Air Tahiti Nui Dreamliner, where the crew extends their tokens of friendliness and smiles as part of their unique Tahitian character. 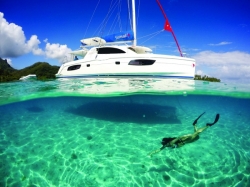 Arrive at the Islands of Tahiti and board a Sunsail sailing catamaran to begin a FIVE day, FIVE night adventure and enjoy the endless flexibility, privacy, and freedom provided by your 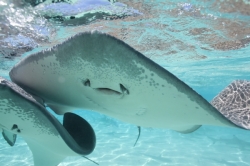 Explore the Society islands of Raiatea, Tahaa, Huanine, and romantic Bora Bora as they enchant you with their individual uniqueness and unrivaled tropical beauty. Each island offers a slightly different ambiance where you can explore volcanic remains, spot turtles, 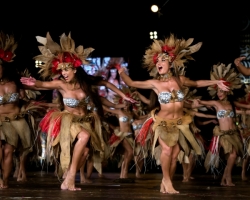 dolphins, unspoiled coral, and shoals of colorful fish. There is so much to experience swimming with sharks and manta rays, afterwards enjoying the excellent French cuisine.

We planned this vacation during the Tahiti Pearl Regatta, which takes place in early May annually, and has emerged as one of the most beautiful, festive regattas in the world including traditional Tahitian dance shows, fire jugglers, and costume parties on the beach.

After your sailing journey, you'll arrive for TWO nights at the Conrad Bora Bora Nui. A blissful and luxurious resort where relaxation and unparalleled views await, you will experience the longest private stretch of soft white sand beaches nestled between the soaring backdrop of Mount Otemanu and a mesmerizing lagoon. Accommodations will be in the spectacular and extravagant overwater villas that Bora Bora is renown for. Just imagine unwinding and relaxing in your own personal infinity pool.

SAVE THE DATE: Novi Boat Show

SAVE THE DATE: Northwest Sportshow

Penetanguishene: The Gateway to Georgian Bay 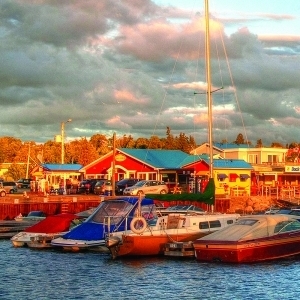