So says Michele Burke, the new president of the Lake Erie Marine Trades Association, who has boldly scrapped previous show plans in order to reinvent the long-standing four-day event.

“This year we wiped the slate clean,” Burke said, “and started out with one premise: that the old show is over and we intend to stage a well-rounded boating event that includes new ideas and exciting features that will give everyone many reasons to want to attend.”

While the show itself will mark its 45th anniversary, a much bigger anniversary is being planned as a special event taking place at the boat show. It’s called the Lyman 90 Celebration and it will acknowledge the nine decades the venerable Lake Erie-designed boat was built in Sandusky just a stone’s throw from the Cedar Point show site. It will include the display of a Lyman built there from each of the nine decades, plus historical displays and more.

Also being added to the boat show’s new features this year will be the inclusion of the Toledo Antique and Classic Boat Show. “Coupled with the Lyman event, we’re excited the traditional Antique and Classic Boats event will be held at our show,” explained Burke. “It will be a show within a big show, as each really comprises a show unto themselves.”

All the nostalgia will be surrounded by “new” in many other ways. For example, the old food service is gone, replaced by selected food trucks to provide a much bigger variety for show visitors. A first-ever schedule of on-stage seminars covering topics like important winterizing tips, the latest smartphone boating apps, and many more will be installed in the big marine accessories tent that’s being relocated to the show’s entrance this year.

Also new this year will be: a series of walleye and smallmouth clinics from a boat that will serve as both a stage and an example of a perfectly-rigged angling machine; a first-ever “Parking Lot Sale” in which dealers will display a variety of pre-owned, trailerable fishing, runabout, and watersport models at clearance prices; and an expanded variety of live musical entertainment performed daily, among other additions. 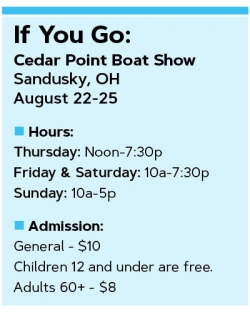 All will all be surrounded by some 400 new boats, of course, ranging from inflatables to motor yachts, most on display dockside, in this - the oldest and largest in-water boat show on the Great Lakes.

“We’ll have literally every major brand this year represented by dealers from around Ohio,” said Burke. “And, one of the trademarks of this show is that many of the boats are available for demo rides.”

Everything won’t be new, however. “Discover Sailing,” one of the oldest and most popular features, will be back. Since first initiated, professional instructors from Harbor North have taken more than 600 show visitors out to sample sailing on Sandusky Bay. Guests actually take the helm and trim sails for a true sailing experience.

Annually, more than 12,000 boaters from Ohio, Michigan, Indiana, and Pennsylvania attend this show slated for August 22-25 this year. New expanded hours to make the show more convenient for visitors have also been announced.

For updates and more, go to: www.cedarpointboatshow.com

Go Back |  Add To Your Calendar

A Thousand Things To Do In The 1000 Islands 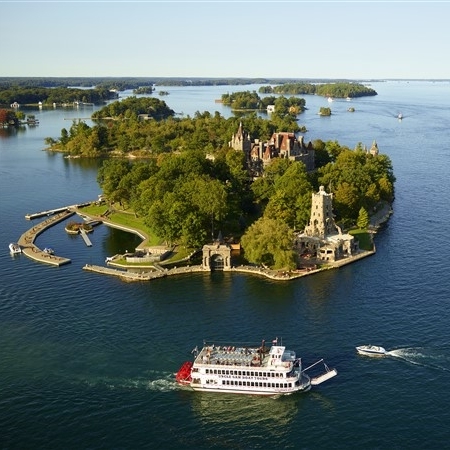